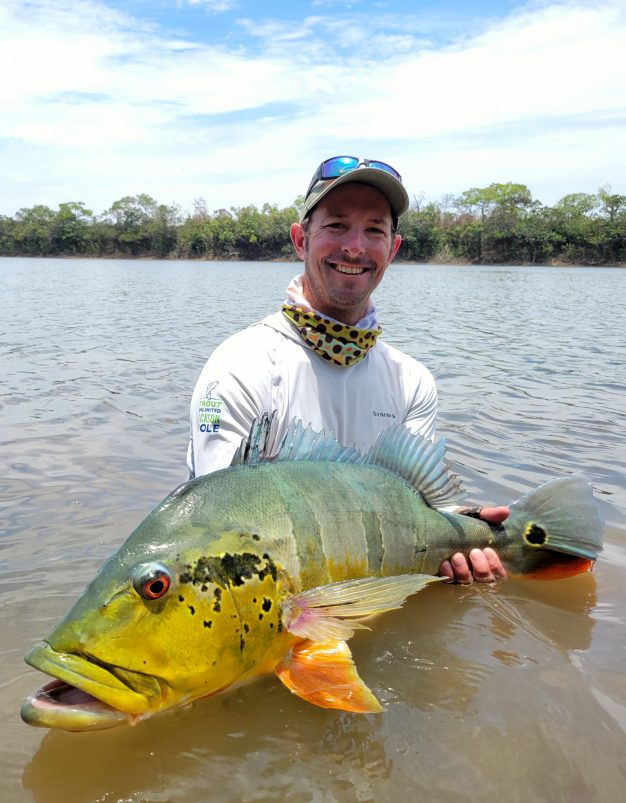 On March 15th, 2022 I traveled to Colombia to fish for Peacock Bass and Payara. Flights were straight forward, departing from Houston, TX directly to Bogota. I arrived early in the morning on the 15th and was met by a driver who took me to a nearby hotel. I spent the rest of the day of the 15th enjoying a few sights in Bogota and eating lunch at a restaurant called Andres.  I would recommend eating lunch there!  Everything was quick easy and comfortable with our travel and accommodations in Bogota. We departed from the domestic airport there the morning of March 16th and headed to Puerto Carreno for our fishing trip.  Do not be surprised by having to pay a tax and excess baggage fees.  The tax for Puerto Carreno was required to be paid in pesos so have some available.

The flight to Puerto Carreno was about 1.5 hours.  When we arrived we were met by the guides/drivers in 4x4 Land Cruisers and Toyota Hilux and taken to lunch in town.  A few cold beers and a chuleta de cerdo later I was relaxed and enjoying the company of the crew that made up our group of guides and anglers.  We left Puerto Carreno and drove through interesting landscapes and scenery.  A few ferries carried the trucks across at river crossings and soon we were on the banks of the Orinoco River.  Smaller John boats transported us about 30 minutes to the camp. 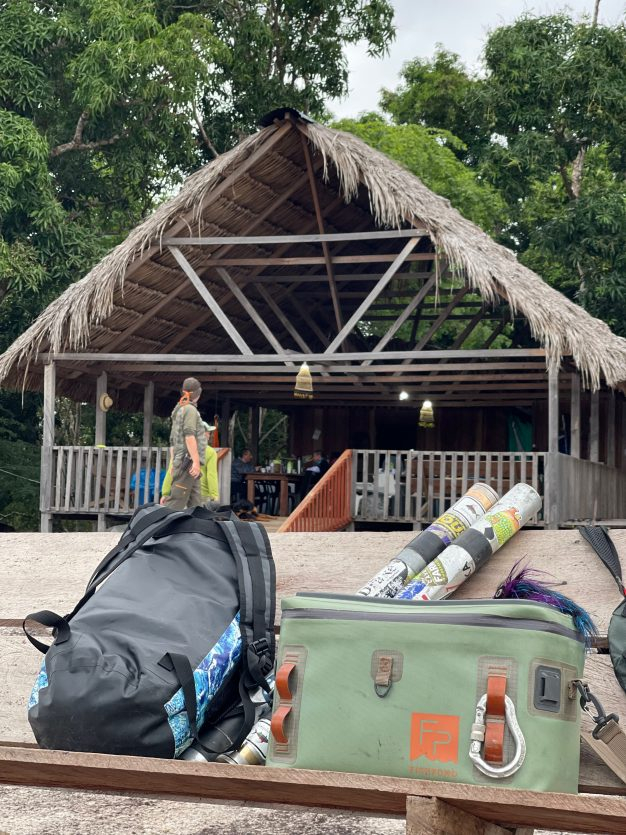 There we were welcomed for the next few days by Diego our trip host.  The lodging at the camp on the Orinoco are wooden huts, each with a bathroom (sink, shower, toilet), and two twin beds, bug nets, and small a/c units by each bed.  The food was filling and good considering how far out we were.  We were excited to fish the rapids of the river for Payara the next few days. 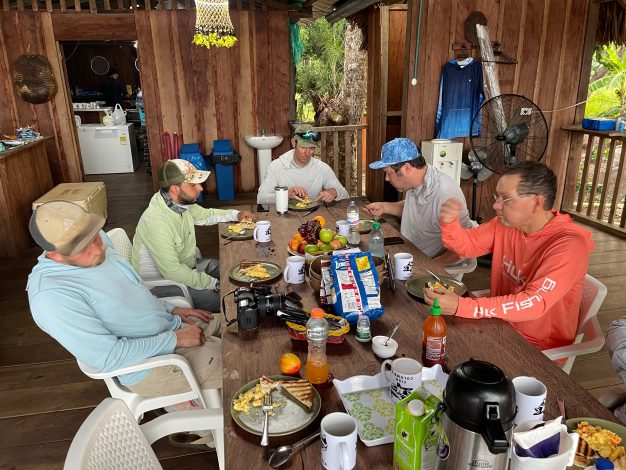 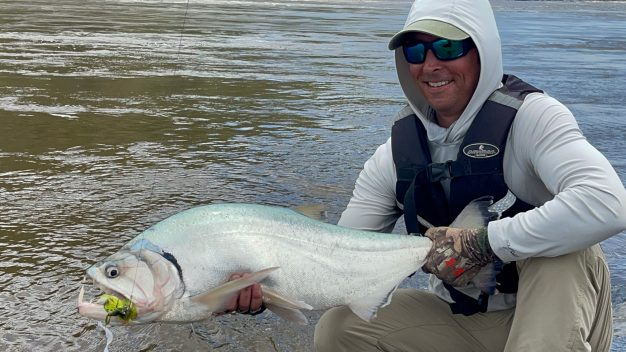 Each day we traveled to the rapids roughly an hour by boat upstream from the lodge.  The rapids are impressive, the river is huge.  We rigged up with large flies and heavy lines.  The fishing was not extremely productive, but we were targeting big fish, with big flies. We caught them, but the bite was slow.  I wasn’t sure what to expect, but in that regard the fishing met my expectations.   Payara pull hard in the strong river current, and a few were acrobatic.  If I were to go fish for Payara again I would bring a second spool or reel with a 450 grain line, I fished with a 350 grain.  Shooting heads will work better here over full sink lines. 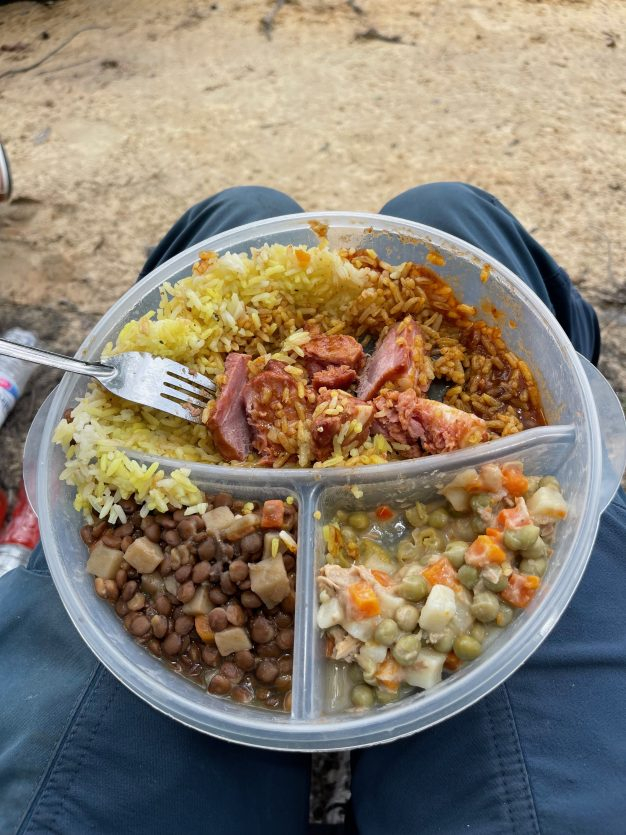 I would also bring some worm head weights to add weight to the fly directly.  I had success with Musky style Bulkhead fly’s, 8”-12” in length.  The most productive color was the classic chartreuse/white silver dragon tail, the second best was brown/red and gold dragon tail, I caught one good fish on purple and black.  These were tied with premium quality hooks.  The fish don’t tear up flies as badly as I thought, but I should have brought more of these patterns, especially for the second half of the trip fishing for peacocks. I fished 40lb RIO toothy critter tippet but wished I had a swivel to attach the wire to my leader.  A swivel would really help while throwing long casts and not twisting your line.  Anglers familiar with Musky fishing know this trick, and if you don’t, there are plenty of online forums to figure it out. 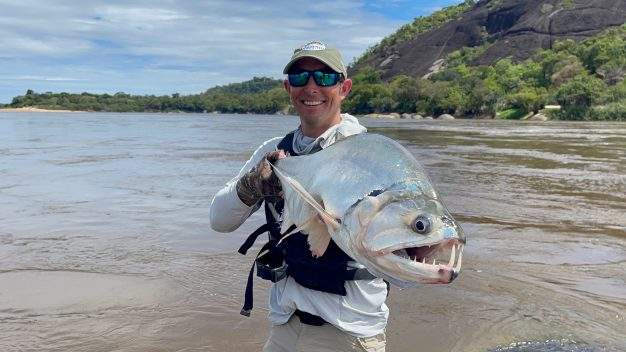 Day 5 we moved up the Tomo River to another camp on the edge of El Tuparro National Park.  The distance to camp is roughly 100 miles and it’s 5 hours by boat.  We fished along the way, and I found the day of travel interesting and enjoyable.  The fishing was productive and we landed some nice Peacocks in the 8-10 pound range.  I was set up for this portion of the trip with a 9 and 10 wt. rod each day.  I threw my 350 grain line on my 9 weight and a floating line with a popper on the 10 wt.  There was not much bi-catch as with my other experience fishing for Peacock Bass in Brazil.  We fished various points on the river and lagoons for the next 4 days.  The largest fish ate large bait fish imitations on sinking lines.  We also caught lots of fish on poppers, some close to the 10 lb mark.  A simple mylar popper with long saddle hackles was productive enough to keep fishing it. 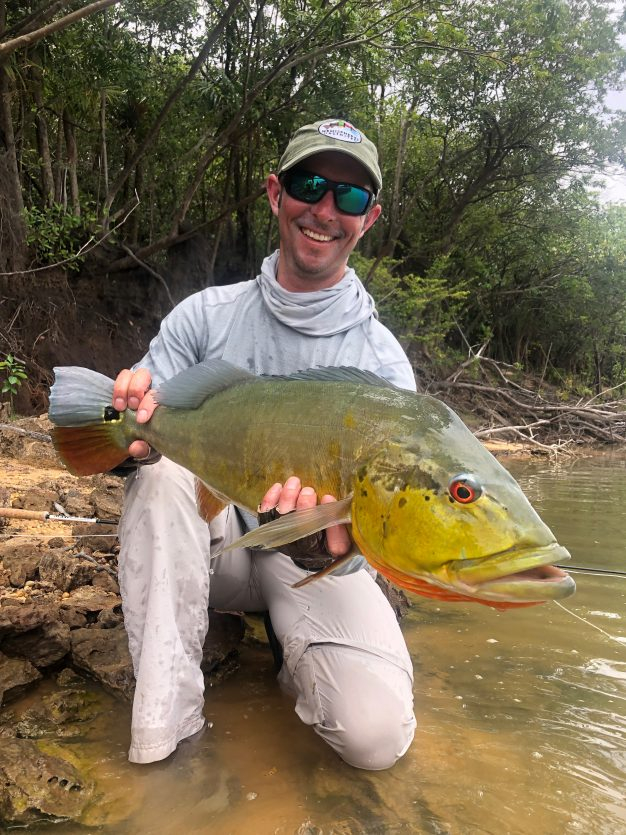 I appreciated that the fish were still interested in eating poppers even though we were at the end of the fishing season, unlike places where Peacock Bass get a lot of angling pressure.  I think this is due to giving the river a rest period while you are moving camps up the river.  We did as a group experience some lulls in the action, and I would go as far to say one day was slow fishing, but if you haven’t had days like that, you haven’t been fishing very much.  We moved to the upper camp day 7, fishing along the way, and fished a full day there on day 8.  I enjoyed the days we moved camps.  I just put on my headphones, watched birds, Dolphin, Cayman, Tapir, and looked for hunting fish. 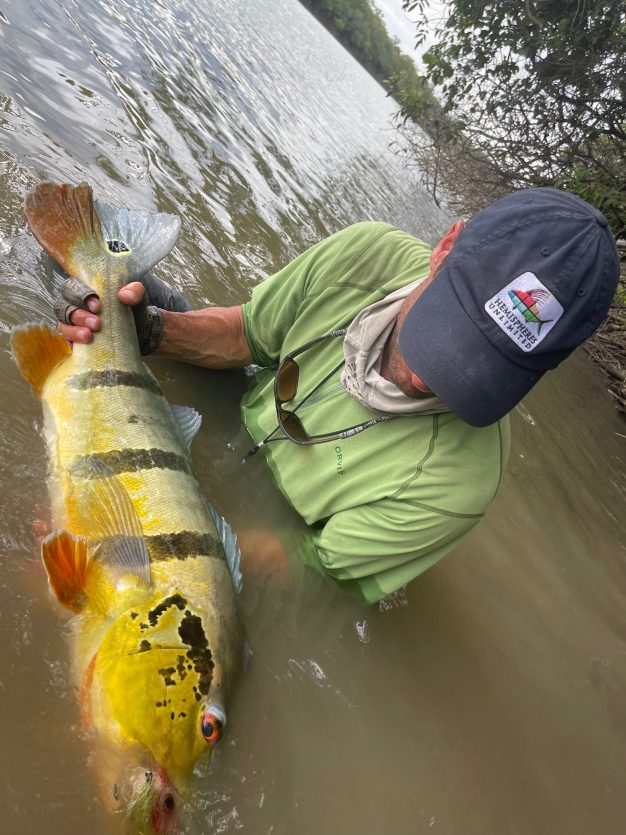 Justin and Mike had by this time landed some really nice fish on big flies and fast sinking lines.  I was still too drawn to fishing the popper.  Finally on day 8, Justin gave me one of his masterfully tied streamers.  It was again a chartreuse fly, and I could appreciate every thoughtful thread wrap and strand of material on it.  I landed my largest bass of the trip on Justin’s fly on the last day, an 18 pound beauty. Fitting! 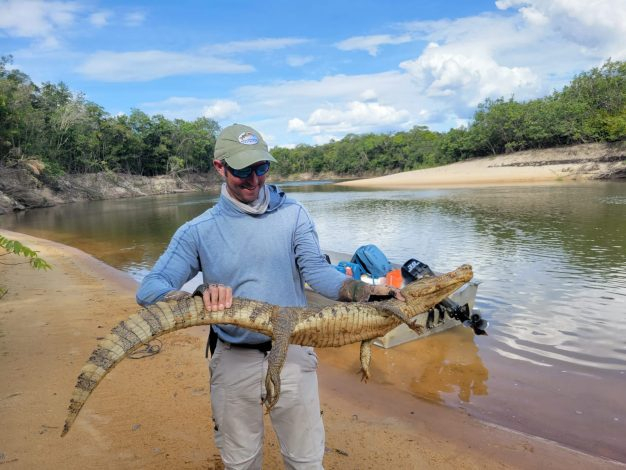 The camp life for this portion of the trip was comfortable.  The tents are large and are on elevated platforms each with a bathroom (shower/toilet, no sink).  The camps have power via generator.  The beds are better than sleeping on the ground, but there’s room for improvement there.  I felt I got enough sleep.  The food is not for people craving gourmet meals, but it’s adequate and I didn’t go hungry. 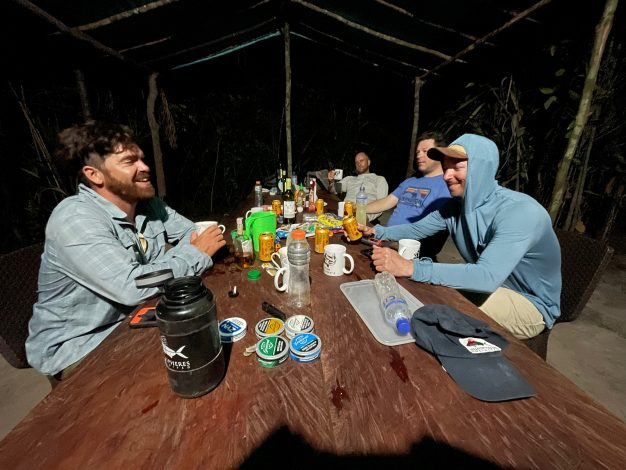 Day 9. Travel day back to Bogota:

Day 9 might have been the toughest travel day.  After an early wake-up, and late breakfast, we started down river to a pick-up point on the Tomo River. 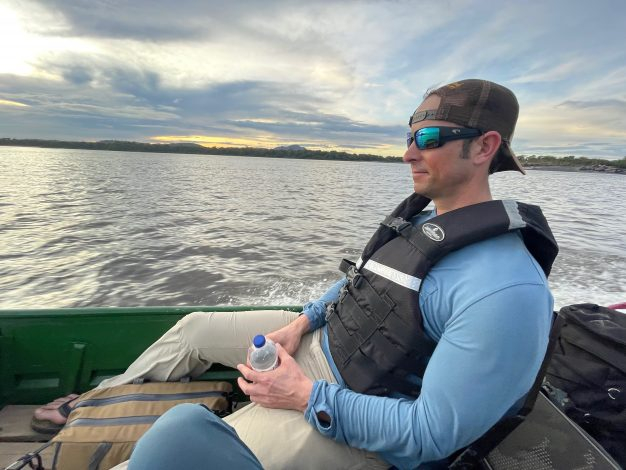 We loaded our gear and set off for a 5 hour drive to a small airstrip.  The scenery to the airstrip was not as interesting, and the road was rough, but that’s what it takes.  We boarded what I think was a PA-30 Comanche. 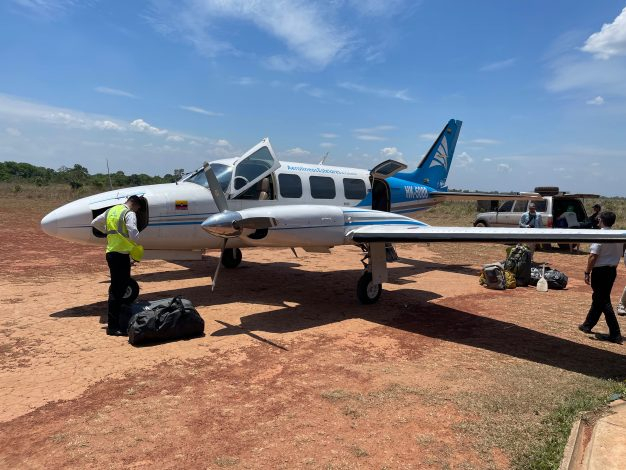 The hour flight was easy and the young pilot stuck the landing like a seasoned veteran.  We landed in Villa Vicencio and got into a comfortable van for the ride to Bogota.  The drive had nice scenery through the mountains that separate the two cities.  There are certain aspects of an operation that are contracted out of the agency that takes you fishing, and these are in some ways out of their control.  In all, the travel from the river back to our hotel in Bogota took 12 hours.  It was a long day.

·         The staff and our guides worked hard and I enjoyed my guide Huesos. Huesos was an expert boatman and knew the river like the back of his eyelids which was good when you’re running full open in the dark.  Huesos is a fly angler as well.

·          If you don’t speak Spanish, a small handheld translator, or phone app would help you out.

·         Headphones were great to have on while we were running hours up river, it just drowns out the motor.

·         There’s laundry at each camp so bring less cloths and more fishing gear.  Make sure to bring cloths that cover you up from the relentless sun and bugs.  Closed toe shoes are a plus, the bugs will get into your pant legs and eat around your ankles so a few pairs of cotton socks would have been nice.

·         There is only beer in camp, so stop at Duty Free before leaving the airport if you want hard liquor.

·         Bring more than the suggested $300 for a tip.  This is a multi-layered operation and everyone is working hard to make it enjoyable.