Finally, a back door to the big leagues

Jurassic Lake has been in the news now long enough for almost anyone who is plugged into fly fishing to know what it's all about.  Huge rainbows and lots of them, right in front of the lodge, and almost constant action.  But what most people don't know is that there is so much more to that spot and its surrounding waters than just the boca of the Barrancoso River.  And the Trout Bum Jurassic is the first program ever to access the huge network of practically unexplored nearby fisheries that are continuously being discovered all around it.

Plus, not everybody can afford (or is even looking for) a standard week in the lodge with its focus almost entirely on just the mouth of the river.

The Trout Bum Jurassic program is instead a continuously expanding exploratory mission, with its base of operations just upstream of the lodge, but with access to the over 20 kilometers of the Rio Barrancoso that lie within the boundaries of the estancia, numerous famous bays on Jurassic lake itself, plus many other as yet unnamed spring creeks within the surrounding properties and a huge number of small and mostly unnamed lakes!  In other words, there is A LOT left to explore, and the possibilities seem only to be expanding.

The fishing itinerary for our Trout Bum Jurassic program is kept flexible in many ways, but built on a foundation of reliable waters that are far more numerous than can be covered in a week.  Groups that want to step off the edges of the map though onto new waters we haven't yet dug our fingers into are always welcome to help us continue to explore; there's more of that water than we'll be able to cover over the next ten seasons.

One of the things that sets this program apart from any other on Jurassic lake is the use of boats – and this is a game changer.  In the lake itself there often seems to be a direct relationship between the distance an angler can cast and the size of fish that angler is hooking.  Within thirty feet there are always plenty of fish up to ten pounds.  Sixty feet gets you into the teens.  But the fish over twenty pounds almost always seem to be ninety or more feet from shore.  Jump in a raft, and suddenly you’re casting towards shore at those fish and as close to them as you might need to get.  We can’t put the boats in every day and have to be selective with relation to wind, but most of the time we can do it and it allows our Bum guests the absolute best view of the lake, facing in! 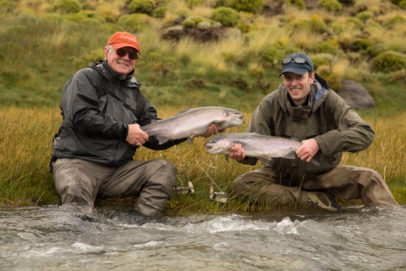 Early in the season we fish quite a bit on the upper 25 kilometers of the Barrancoso River that lie within the estancia, where spawning fish from the lake below provide excellent sight casting opportunities in crystal clear water.  Residents of the river are available and responsive to sight-cast dries all season long.

And then there are the other lakes… the estancia has too many smaller lakes filled to the gills with fish for all of them to even have names, and we are still in the process of figuring out what holds what.  One thing is for certain though – lots of them hold really, really big fish.  Why not come down and help us out?

The diversity of waters fished on this program really require three different lines, a floating, and intermediate sink, and a full sink.  The waters are just that diverse.  Upon signing up for a trip we’ll send a pre-trip planner that has detailed lists of gear and flies to bring down, but our guides always have special patterns they’ve developed usually just the week before that are working well right then and you are welcome to them.  The list also details all other requirements for the trip, from clothing and gear to checklists for the travel itself.

Our Trout Bum Jurassic program is set up as a permanent base camp on the Rio Barrancoso, just upstream from the main Jurassic Lake Lodge, and depending on group plans sometimes also does one night branch camps at further out locations.

The first night on the way in to the lodge is spent in a hotel in Gobernnador Gregores, allowing for alcohol and other shopping, but still getting you on the water and fishing by mid-morning the next day.

After that you’ve got five nights of camping.  The camps are comfortable but basic with tents, chairs, camp tables – all the usual “car camping” amenities.

After fishing the last day of the trip you’ll head back to Gobernador Gregores and the hotel to clean up and re-pack, then the next day ride the transfer to Calafate for your flight home. 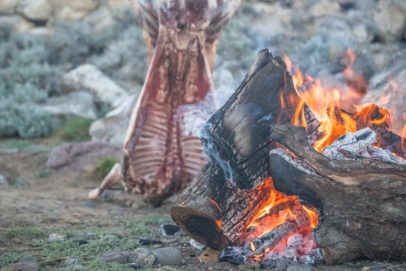 Food on the Jurassic Bum program is typical campsite fare.  A choice between quick cereal and fruit for breakfast or else cooked eggs and the works, depending on how anxious you are to get out on the water and at the fish.  Lunches are served wherever we are fishing when you get hungry, and are usually sandwiches and chips and sweets.  Dinners range from steaks to sausages and pastas to a full on lamb asado, all generally with salads and breads and the usual sides.  Soft drinks, coffee, tea, and mate are all available any time, and alcohol can be purchased on the way in that first night in Gobernador Gregores. 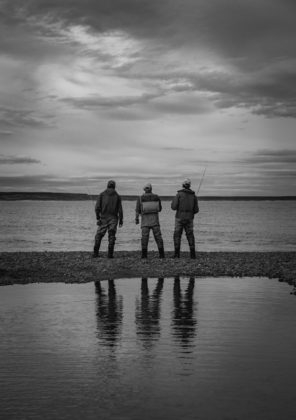 Flights for this package arrive and depart from Calafate, Argentina (airport code FTE), and the rates are all inclusive from the time of your pickup at the airport to the time of your drop off for the flight home. You will most likely arrive first in Argentina by landing at Buenos Aires International Airport (EZE) and will then need to board a ground transfer (bus or cab of approx 45 minutes drive across the city) to Buenos Aires Domestic Airport (AEP) for your flight down to Patagonia. Several reliable ground transport services are available including Manuel Tienda Leon, which runs both buses and private cars between airports with departures approximately every thirty minutes (+/- $15 US dollars for bus, or +/-$35 for private car). You will likely see their ticket counter upon exiting the baggage claim area; if not, then just ask any airport employee and they will point you in the right direction. Independent taxis parked at the curb without reception-desk representation are not reliable and should not be used.

Our staff will then meet you just outside baggage claim at the airport in Calafate, and all of your transportation will be provided from that point on until you are dropped off at the airport again for your return flights home.

Always remember, our services are provided absolutely free; booking a trip through Hemispheres Unlimited WILL NEVER COST YOU A SINGLE PENNY MORE than booking it directly with the lodge or outfitter, but does reap the benefits of our extensive experience 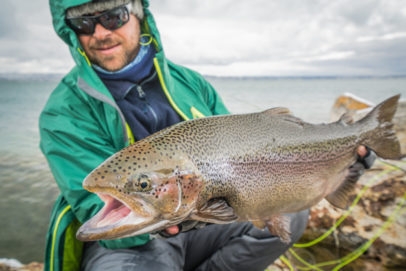 with that destination, as well as our ongoing support services available to you at any time prior to, during, or even after your trip.

Our Trout Bum Jurassic program is open every year from October 1st through June 1st.   Package rates (quoted in US dollars) are per person double occupancy. 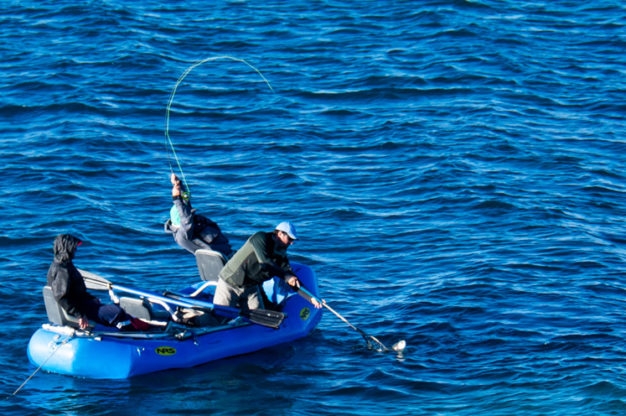 Contact us today for available dates and details, and get started on your way to this bucket-list trip of a lifetime to see just why this amazing area of middle Patagonia has captured the hearts and imaginations of so many fly fisherman from across the globe.