I received my official introduction to the Trout Bum Rio Pico fishing program on just my third cast.  A 20-inch, football-shaped brook trout engulfed my streamer, and I managed to guide it to the net.  I stood aghast at its exceptional proportions.  My excellent guide, Roge Casal, asked if I wanted a picture.  As I started to laugh at the absurdity of the question—of course I wanted a picture of a brook trout that could eat my previous best of the species—Roge released the fish while commenting that we would wait to photograph the “big ones.” 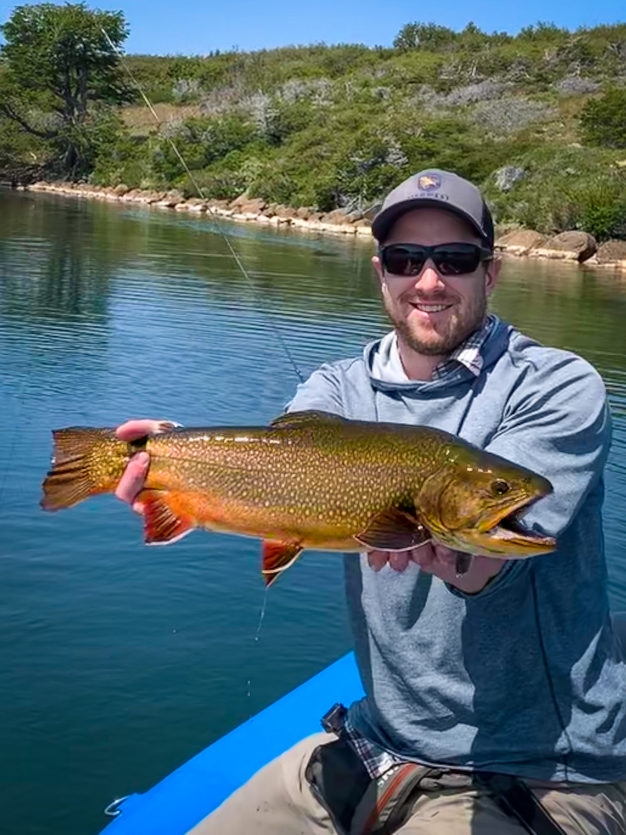 What followed was one of the most remarkable days of fishing imaginable.  We proceeded to catch dozens of brookies, with several topping 24” and few smaller than 18”.  I lost count at 30 fish landed sometime around lunch.  Some casts resulted in four or five fish chasing the streamer back to the boat within plain sight.  I caught my biggest fish by sight after noticing it cruising the shoreline.  My dad and I frequently experienced “dobletes” as we reeled in fish simultaneously.  Roge’s knowledge of the lake shore and his secret “Brookie Killer” streamer were integral to our success.  The experience was unusual and absurd in the best of ways. 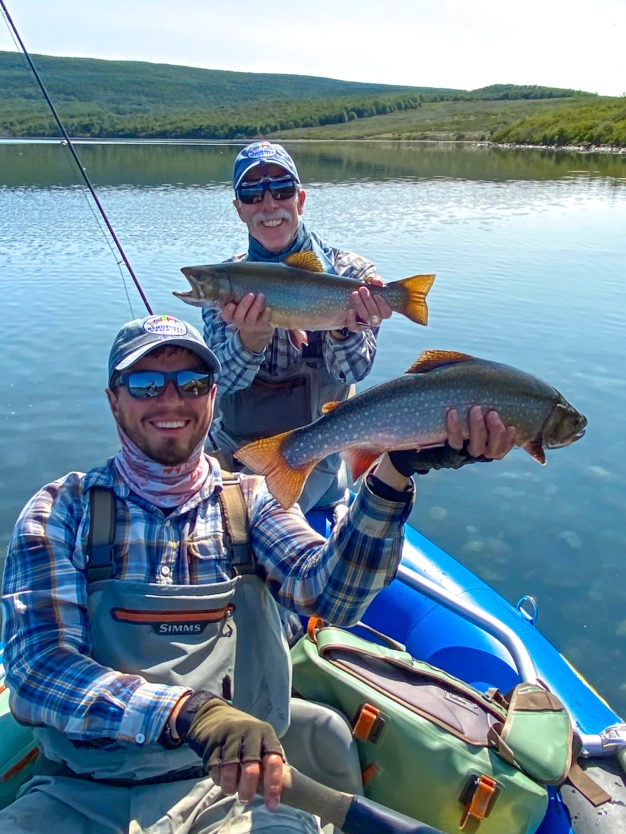 I was content to wrangle leviathan brookies all week, but Roge wanted to explore some surrounding drainages.  I’m glad we did because there was so much to see!  Other days provided a multitude of different opportunities.  We quietly stalked trophy rainbows in reed-lined bays.  We had the opportunity for some “New Zealand-style” sight fishing to respectable browns in one of the local streams.  I had a shot at a chironomid-sipping rainbow that was likely pushing 30”.  In yet another lake, we caught trophy predatory browns on big streamers.  When the wind picked up, Roge knew some secret spots where the gale could be managed. 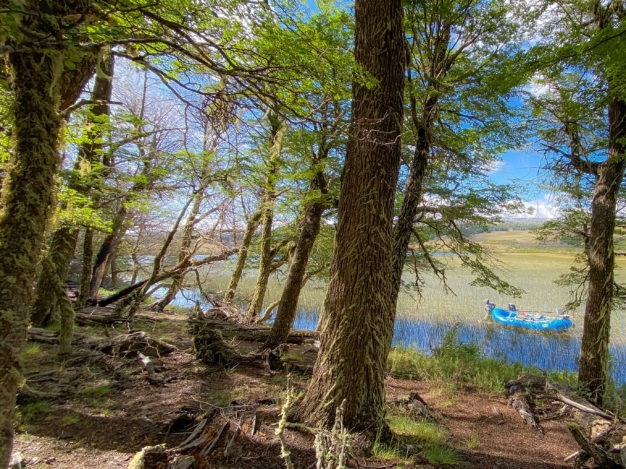 I came across the Trout Bum Rio Pico program while searching for Patagonian DIY fly fishing options.  I usually prefer DIY trips if possible, as the planning is almost as fun for me as the actual trip.  The variety of obstacles to such a venture in Patagonia quickly became apparent, especially when attempting to execute this type of plan on a short time frame.  While the water in Argentina is public, the angler largely needs to know a gaucho to get access to the land that abuts the lakes and streams.  The “roads” to these hidden waters proved reliably heinous and rocky.  No rental car company would be too pleased with their vehicles on these roads, even if they offered a truck possessing the capabilities.  Much of the best water in the area requires a boat to access and to fish effectively, with a requirement of constant attention to the oars in a battle with the ever-present wind.  Independently solving these problems while simultaneously trying to figure out the fishing would be a difficult project. 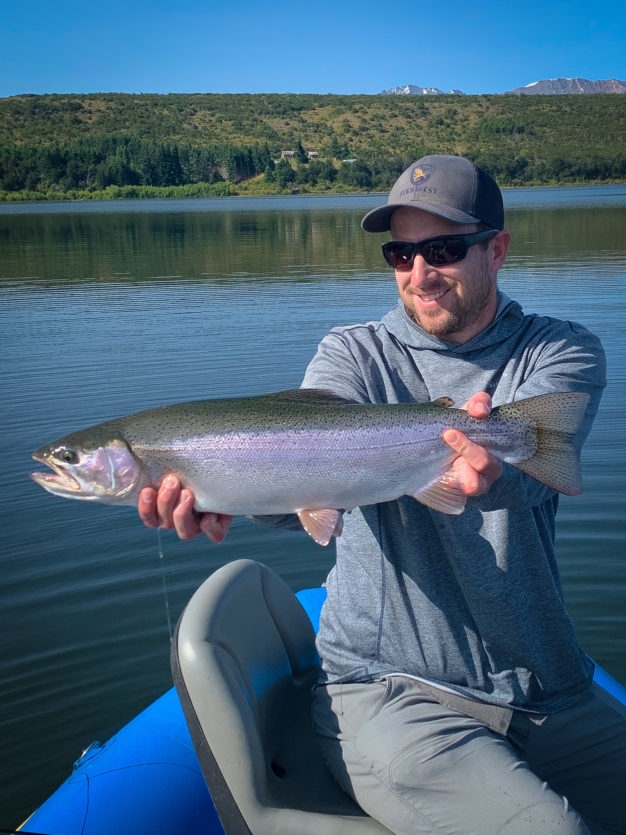 Enter Trout Bum Rio Pico.  This program offered a quick fix for all the challenges mentioned above while providing expertise from guides who grew up in the Chubut Province.  I already mentioned the excellence of our guide, Roge.  I also spent some time getting to know the other two guides on the scene that week, Danny and Gustavo.  All three guides are awesome guys with whom it would be easy to spend a week.  They possess unsurpassed knowledge of the region’s waters.  Justin Witt, the owner of Hemispheres Unlimited, was in town during our week in Rio Pico.  Justin was a gracious host and made sure that the entire operation was running smoothly. 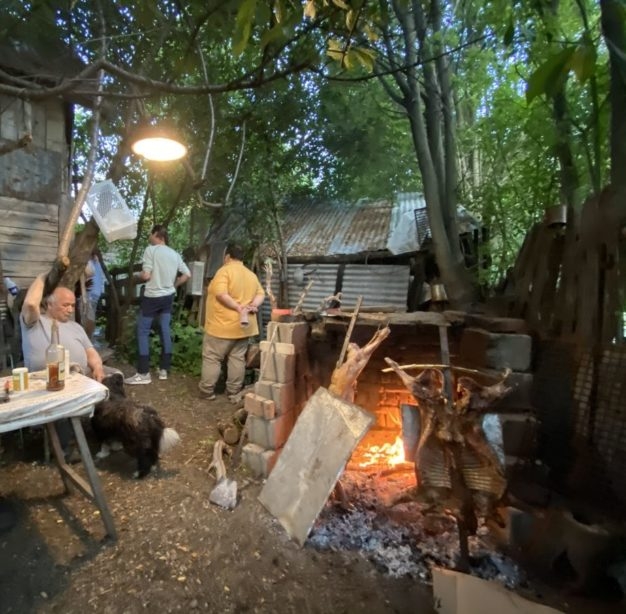 With the Trout Bum Rio Pico program, the angler forgoes some of the creature comforts offered by a couple fancy lodges nearby (and therefore the trip costs half much as the other options).  But that was exactly what I was looking for.  I wanted to be on the water as much as possible.  Paying for a hot tub, silk sheets, and a “free” shirt was beside the point.  Roge obliged my request to maximize fishing opportunities and he worked tirelessly during 12-14 hour days of fishing.  However, when returning from these long days, we were always greeted by food that would rival the best meal from any surrounding lodge: a steak as big as my face, delicious homemade pizza, hamburgers, etc.  A local woman named Karina was the chef for the week, and she ensured that we ate as well as anyone else in the Chubut Province.  We spent one evening with Paulino Arias, a local legend who is largely responsible for developing sustainable fly fishing practices in the region.  Paulino and his family cooked a delicious lamb asado, which paired perfectly with locally-produced $3 bottles of Malbec.  The lodging was simple, but clean and comfortable.  The company was good, and the entire set-up exceeded my expectations. 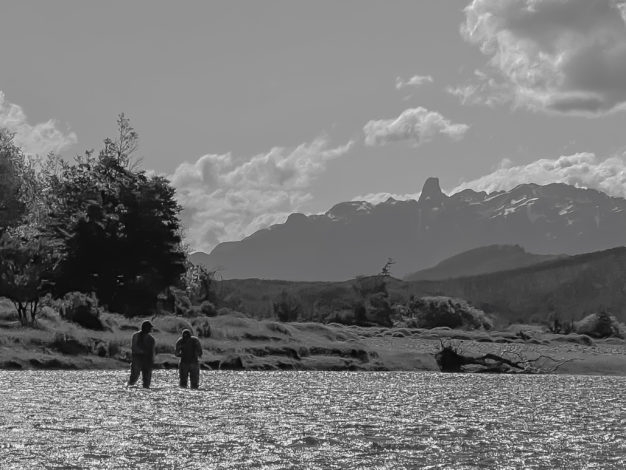 My dad and I agreed that this was our favorite fly fishing trip we have experienced.  My only complaint was that the distractions of the incredible surrounding environs caused me to miss a few hook sets.  Flocks of condors soared overhead, flamingos watched as I netted a 25” rainbow, and snowcapped peaks just across the Chilean frontera hovered above us as we attempted to focus on the fishing.  I now realize that many fly fishing trips feel like bucket list experiences… experiences upon which I fondly reminisce but don’t necessarily need to repeat.  This is not one of those trips.  I plan a prompt return to Rio Pico with my sights set on remote back country streams and lakes that hardly ever see an angler.