The guys and I are still processing just how incredible our float down this river was. We had nothing less than a lifetime experience over the week we were out in the Alaskan back country. We found the "way out there" wilderness float you helped set up to be exactly what we'd hoped for. 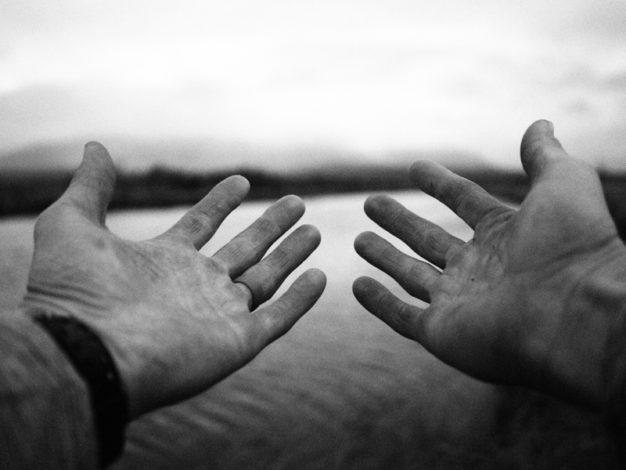 We only saw other humans only once, after reaching the end of the braids where the river opens up on our last day. Other than the occasional float plane fly over, the only company we had was ourselves, grizzlies, and the most fish I've ever seen. 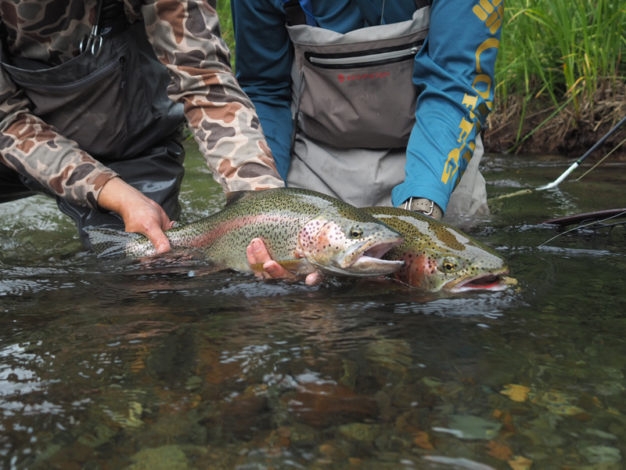 The non-guided version of this float was perfect for our crew with the experience, health, and desires for our first trip to Alaska. Those reading this should however know it wasn't a cake walk by any means. Each day presents new physical and mental challenges that I promise are worth the effort and pay dividends in huge Rainbows, gorgeous Char, countless Salmon, Grizzly sightings, and the best high-fives you'll ever get from your buddies that joined you. 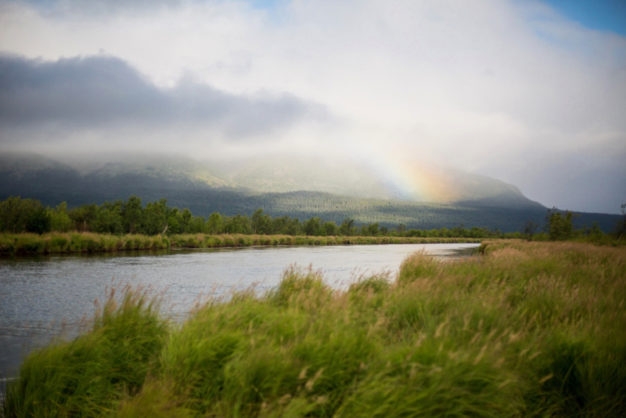 This all started with me daydreaming about Justin's Patagonia Trout Bum program in Argentina, and browsing the Hemispheres Unlimited website. I reached out to Justin about the Alaska float he'd just completed and posted about. When "non-guided" appeared to be an option excitement really set in.

I knew at least 3 other guys that would drool over the prospect of a trip like that. Exploring this on our own with our guiding, fishing, and rowing experience was going to be a perfect fit. Getting the commitment from the guys took surprisingly little time and moved this dream into the planning phase. 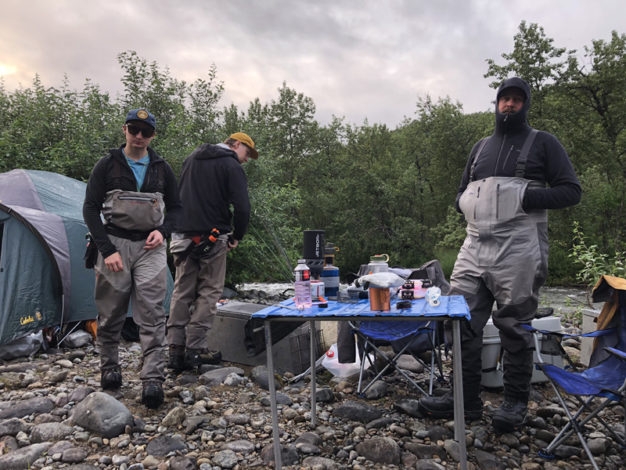 The next year was full of beers over maps, fly tying, and a generally electric enthusiasm for the departure date to arrive. Justin helped us coordinate everything including flights, and ensured we had all the best information to have a successful trip. 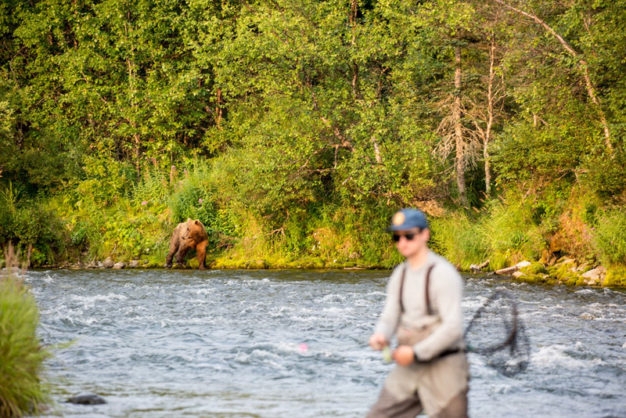 In the midst of all of early planning, I found out that Me and my wife’s first kiddo set to arrive 8 weeks before I headed to Alaska. The anticipation of the birth of Bridger pushed off some of my prep work, but fortunately my wife was incredibly encouraging about Alaska still. All went well, we brought home a healthy baby girl, and packing commenced between nighttime feedings and diaper changes. Life can make it difficult to break away for a trip like this, but with support from family and taking care of business, it absolutely can be done. I think it’s super valuable to show kids the importance of getting after your passions, and I hope that telling Bridger about this trip as she grows up will spark her sense of adventure. 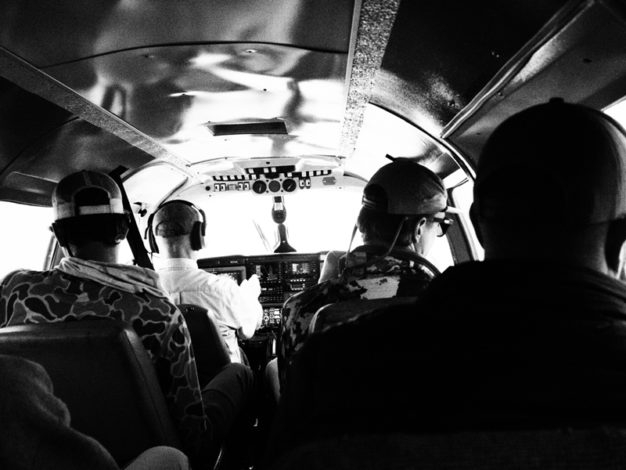 We knew going in that the flows were lower than ideal, and that if we got the final clearance some hard work was going to be in store for us via dragging the raft and ping ponging between low water boulder gardens. Low flows also tend to reveal hidden and toothy rocks that would usually go unnoticed, so we were well versed in boat repair just in case. 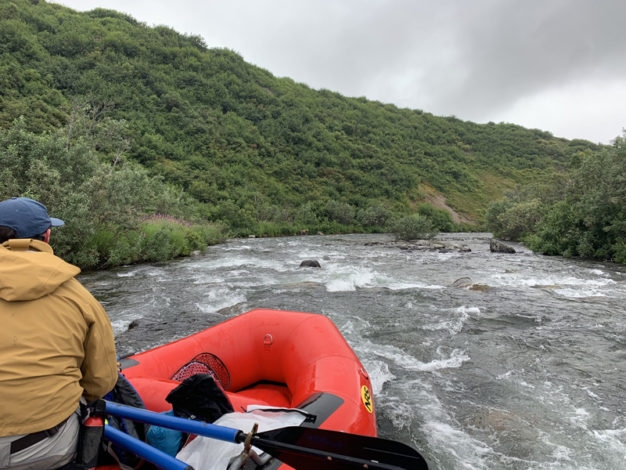 Anchorage had just recorded its highest temperature in tracked history, and precipitation was slim for the season so far. Luckily, what did fall was in the right valley to make our plans a GO. As is the case in Alaska and remote travel, flexibility is key, since weather controls so much of the logistics. Finally knowing our float plan was set cranked up the excitement. Departure date couldn't come soon enough for Ryan, Mike, Mark, and me. As it neared, the further it seemed. Getting everything through security, boarding the plane, and taking off from Atlanta had us feeling like kids released on summer break. Alaska! 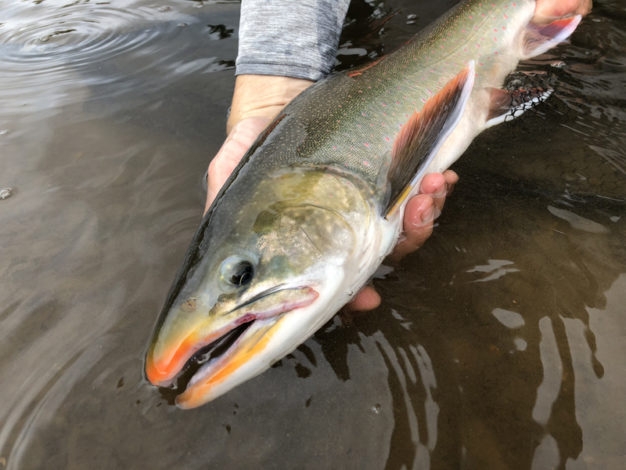 After running around Anchorage grabbing last minute provisions and staying at a not-so-classy air strip motel (my choice to save a buck) we took off with Lake Clark Air for one of the four coolest flights I've been on. (Spoiler alert - the next three flights of this trip are the others.) Flying through the Alaska Range in a small plane, we went wide-eyed at jagged peaks, blue glaciers, snow melt creeks and rivers, and I imagined climbing these mountains in another dream life. 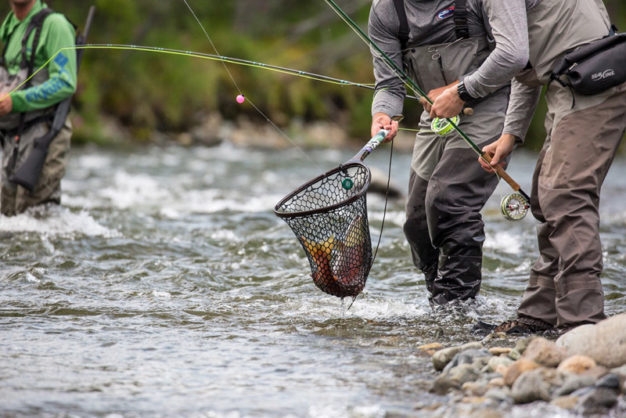 Continuing to board ever shrinking planes, we got picked up at the Iliamna landing strip and shuttled from there to the float plane beach. (We nearly helped unload some Pebble Mine gear for a quiet passenger, but our pilot informed us of our misplaced Southern Hospitality, rectifying that situation - Wrong Mine; Wrong Place) At the float plane beach, our pilot helped make sure we had the gear we needed and advised us to reduce any excess weight in order to float as light as possible. The team stowed anything left behind in their gear shed, and we wadered up. 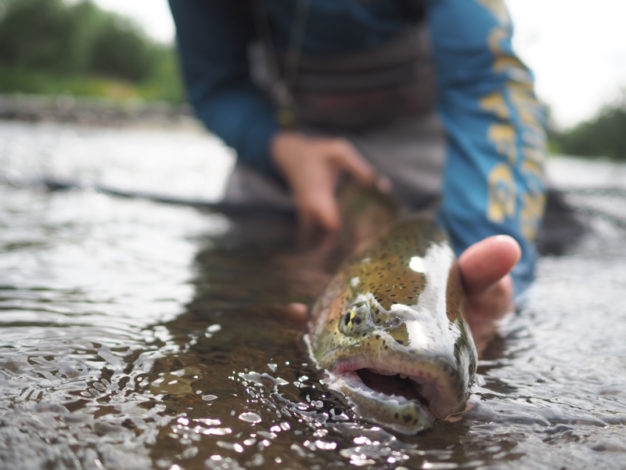 Once loaded and in the air, the float plane soared over the enormous lakes and snaking rivers to our drop off was something else entirely. Flying low over the tundra and finally seeing our coveted objective created 4 of the biggest shit eating grins I've seen to date. 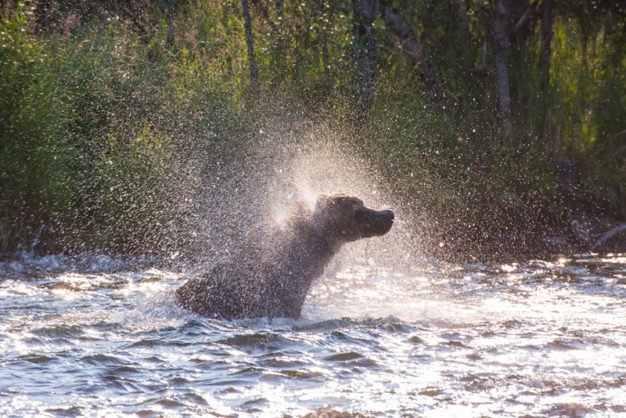 The pilot put the Beaver down smoothly on its floats and taxied us over to the beach with the remainder of our gear neatly laid out.  Now it was up to us assemble the last and smallest craft we'd be traveling in to get underway. Grizzly sighting 1, 2, & 3 occur somewhat immediately after he tipped the wings to us overhead, signaling the start of 6 days of remote fish and bear filled adventure. 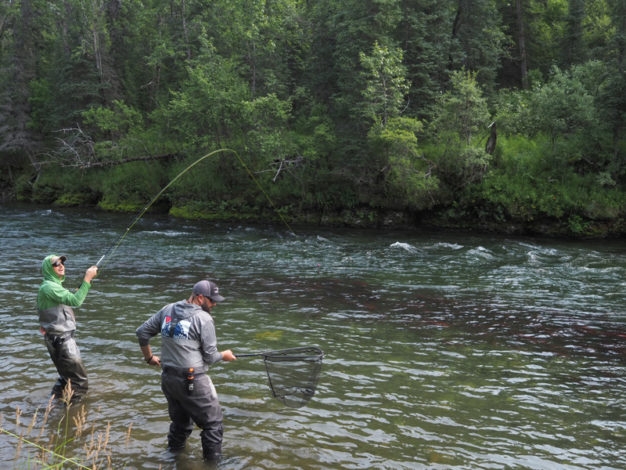 Pods of bright red salmon were cruising the shoreline as we rowed over to the mouth of the river, making our first stop of so many along the way at the first bend below the lake. It didn't take long to miss the biggest rainbows we'd ever fished to, mine on a mouse and Mike's on a big streamer. Ryan and Mark were hooked up to hefty fish in the run below us shortly after. 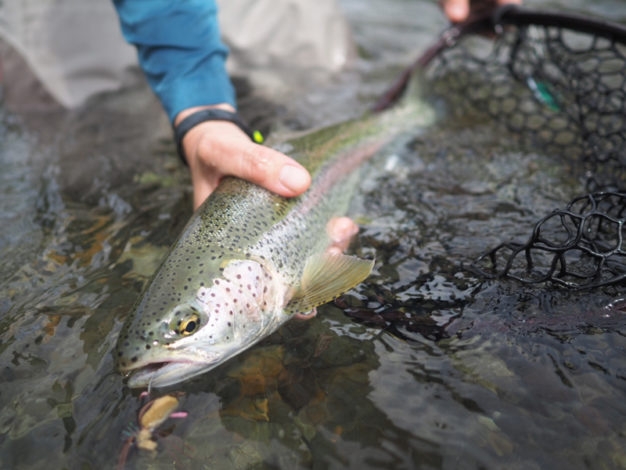 Fish on, fish missed, fish in the bag, fish busted off, heartbreak, triumph, brown bear, fish on... It goes something like that for 6 days straight. Sleep sprinkled in somewhere in the middle of that, but with so much daylight and opportunity, who can sleep anyway? 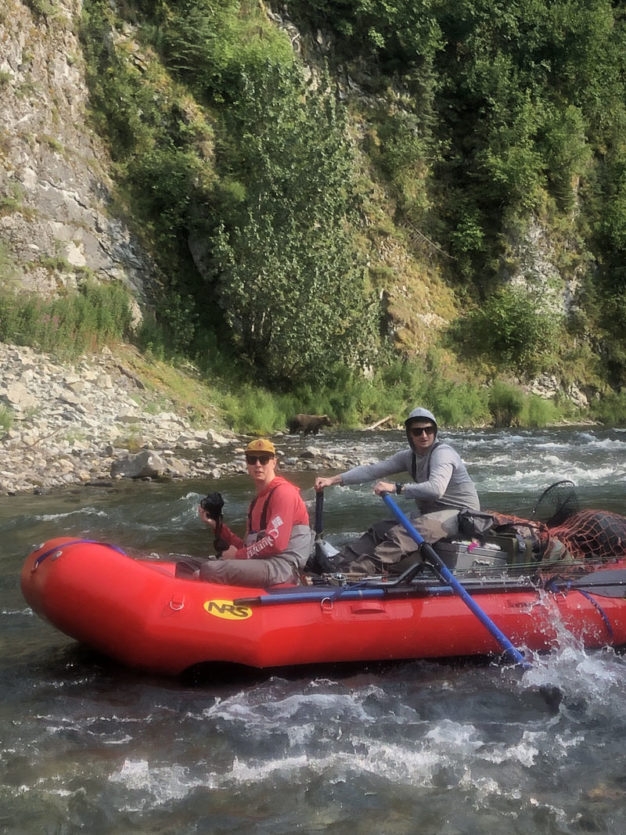 Each guy on the trip undoubtedly has recorded their own unique memories from the first oar dip to the last bag loaded in the pick-up float plane. I can only speak for my own, which won’t soon be forgotten. 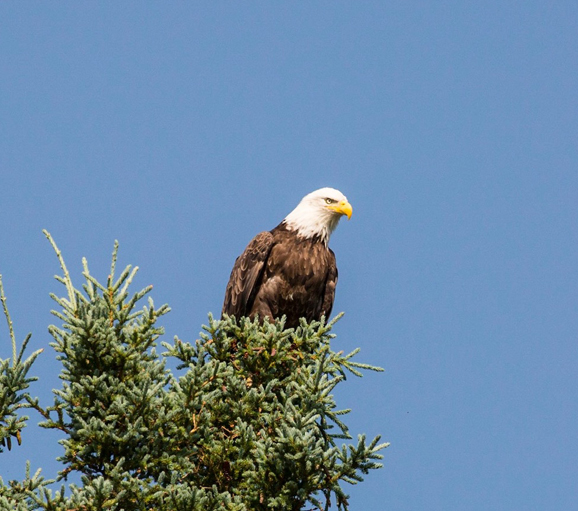 Bears diving for dinner through pods of hundreds of salmon and the sounds of crunching fish bones in their jaws, nervous jitters and subsequent feelings of pride from rowing through fast and consequential drops and wave trains, rounding bends opening up to deep canyons with enormous grizzlies stalking the bank, bald eagles with spanned wings overhead almost pooping on the lead boat, bears walking through camp and taking a dump half way through the stroll. Tossing nets back and forth to land your buddy’s fish so he can then land your fish too. 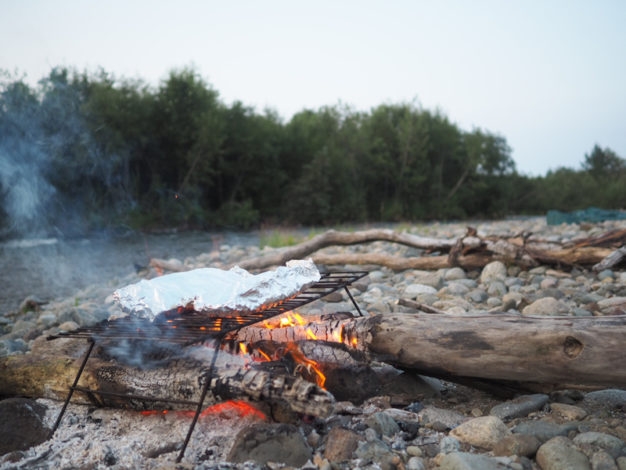 Boiling water for yet another mountain house meal while looking forward to that Char over the fire later, cracked and blistered hands from the weather and constant rowing, wet under layers from a busted crotch in your waders that you wake up extra early to repair. Jaws dropping after netting your buddies best wild streamer fish, Jaws dropping after netting your same buddy’s best and bigger wild mouse fish, losing fish, catching more fish, trading fishing holes out with bears (because we now know those are the best spots). Wolf tracks over your own boot prints in the crispy morning, bear tracks bigger than your head on a back channel full of hungry rainbows, log jams, all of it, for days... 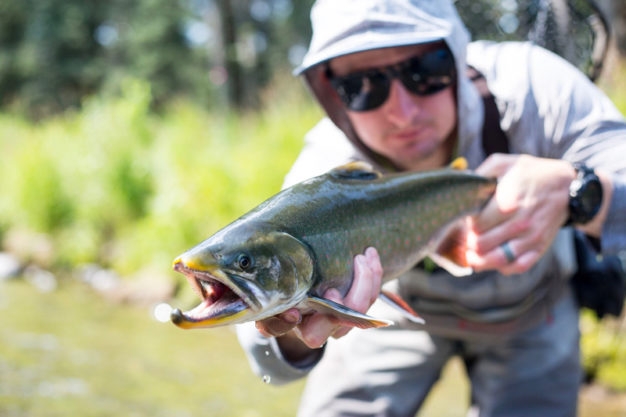 I think we counted 56 brown bear sightings start to finish, with no less than 10 qualifying as "encounters" in my book. We were all well prepared for these, and all were smooth sailing - no harm, no foul. We were bluff charged up at the top for our first encounter, but really, they wanted nothing to do with us, as expected. 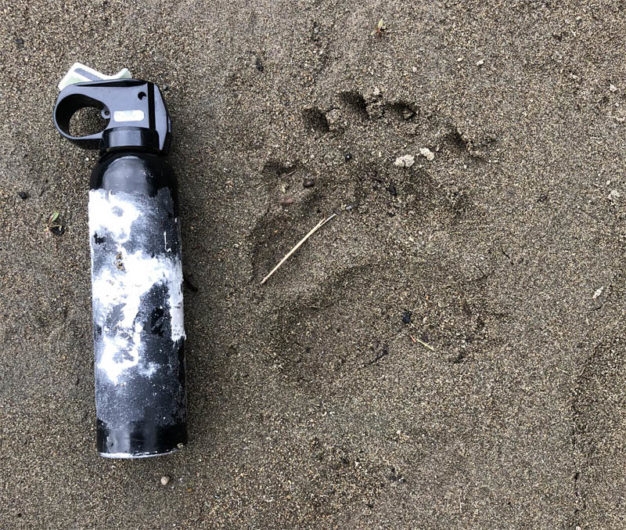 The fishing was truly epic. There were countless doubles, and it was nearly as fun seeing all your buddies hook big fish and help get them to the net as fighting one yourself. 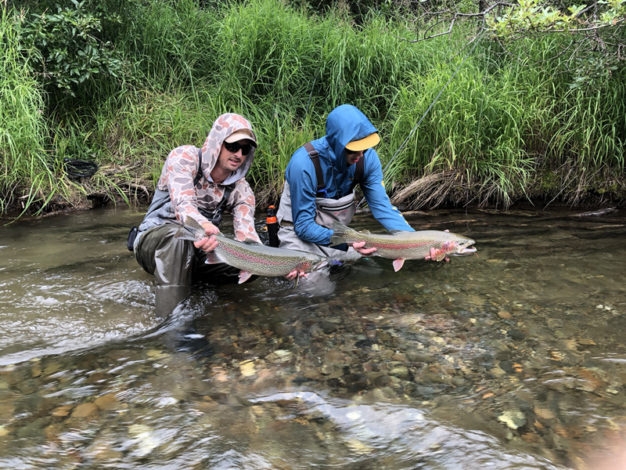 We saw more salmon than I could fathom - the river literally turning red in many bends. The variety of landscapes each day was so surprising. We were welcomed with new scenery and fishing around every bend, mile after glorious mile. 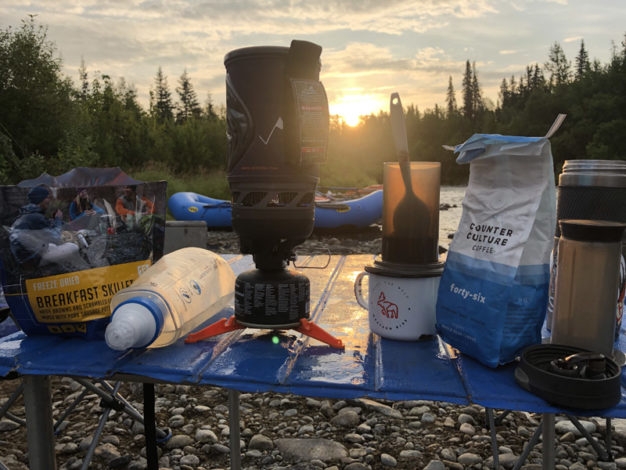 We rolled up on and stayed at 2 of the best campsites of my life on big gravel bends with incredible views and fishing from the bank. The other sites didn't disappoint either. Just watch for rising water and the river seeking to flow through your tent. It'll win; I promise. 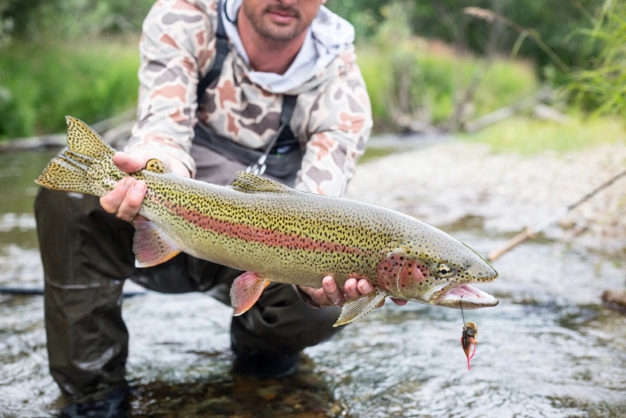 As will happen in Alaska, the pickup plane ran late, due to weather conditions. 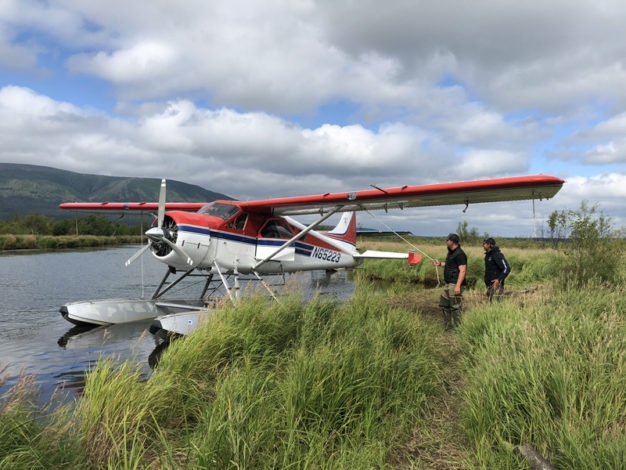 We finally broke down and called the pilot from the Sat phone to check in. They let us know the deal and got our flight out of Iliamna re-arranged to ensure we would have the wilderness band aid ripped right off, as was sadly planned. 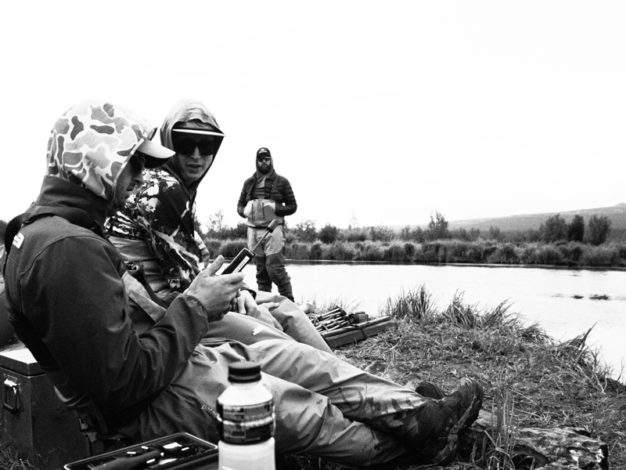 It was almost good to have to sit there for an extra few hours just to contemplate what we'd been through and talk about a return trip with all the intel we’d earned. The fire in us to get lost and explore wild places was already burning, and this trip served to really stoke that. It surely won't be our last Alaskan expedition, and it sounds like Argentina is next…