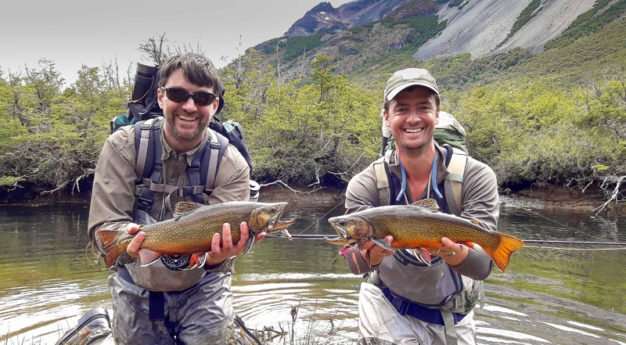 There are a couple things you should know about Justin Witt’s trout bum program. First, the brook trout are big. And they’re abundant. And they live in the most beautiful places. The same applies to the rainbows and browns, judging from the photos Justin had pinned to the wall. But that wasn’t the focus of our trip so I won’t opine.

Second thing:  You don’t waste a lot of time with non-fishing activities, like plucking chocolates from your pillow or enjoying apres-fish whirlpools. That’s why the price is half of what you’ll pay elsewhere. It’s also why you catch a lot of fish. 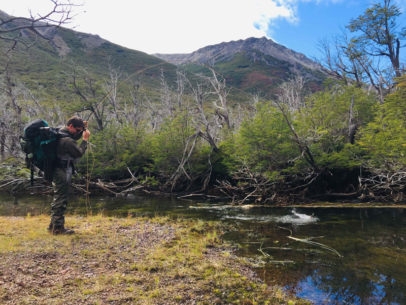 Now that we’ve got that out of the way, the details: I’d met Justin before our trip. His stories were impressive. But as a former fishing guide and journalist stationed next door in Chile, I was skeptical. I snooped around. I bought my own maps. I skipped the internet propaganda but talked with others that knew the area, plus a couple Chilean guides familiar with Justin’s outfit. His promises of massive brook trout in scarcely trodden territory checked out.  I booked.

Reality, for once, the trip exceeded expectations. Justin assigned us to Argentine guide Daniel Jaramillo, of Esquel. It was the first time my fishing partner, Matt, or I - both from Maine – had ever spent more than a scattered day or two fishing with a guide. At first, it was awkward. Who was this guy offering to tie on our flies? We got over that quickly. A first-class guide and angler who grew up just miles from where we fished, Daniel shared our passions: hunting deer and ducks, sipping maté while watching trout rise, a love of wild places.

On our first day on the water, we fished from rafts in a gale but still hooked and landed upwards of two dozen brook trout over 5 pounds. Some pushed 8 pounds. Every one was bigger than anything we’d caught in a lifetime fishing in Maine. All were dressed in their spawning best, with sunset bellies bleeding to a bulging flank of yellow stars with blue and red and orange halos. The fishing was so good we asked to go back the next day. Same story, except this time we were blessed with the rarest of gifts in Patagonia – a windless day. 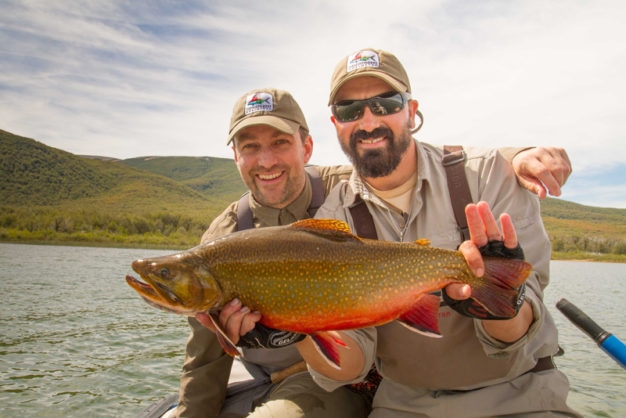 We enjoyed it alone on a lake that may well harbor the next world record brook trout. The day’s highlight was missing a small one – a five or six pounder –  in a shallow cove strewn with boulders, then watching my buddy Matt unfurl a beautiful cast beside the still rolling boil. The water exploded again and this time, a brook trout near ten pounds blasted from the cove and tail walked across the surface. Matt’s bright orange was tucked neatly into the corner of his mouth. Yes, that really happened. 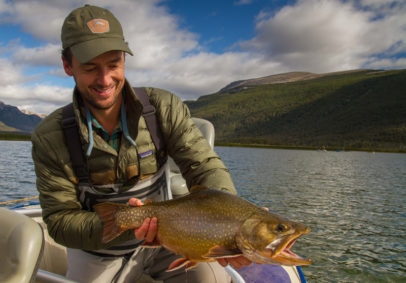 On the third day, the fishing got better.  The plan was brookies again, at our insistence. Justin said we should consider a lake with 10-pound rainbows instead. That was tempting but we had brook trout on the mind. These are the kinds of decisions you have to make on a trip like this. We struck off into ever more more remote country near the border with Chile, this time with tents and sleeping bags strapped to our backs. 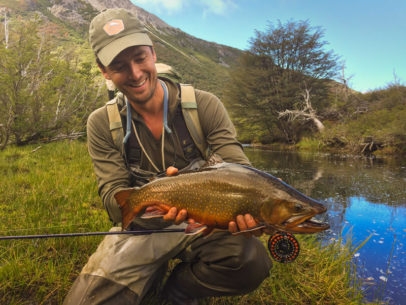 We were fishing a river now, one that sees just a handful of anglers a year, though none while we were there. The flowage in many places was no wider than the Toyota Hi-Lux that we’d parked at the trailhead three hours away. All around us were Andean peaks that plunged almost vertically down to the river through patches of lenga and scree fields still nipped with winter snows.  The scenery was special but the river was familiar territory for a couple of Maine boys. Daniel made some suggestions but we knew what brook trout liked in small streams. We strapped on size 12 olive buggers and flailed the water. After nabbing a couple pretty 8-inch trout, I began to have my doubts. Matt frowned. Daniel suggested maybe a bigger fly, plucking a foot-long white tube fly bigger than the two fish I’d just tossed back. Ten of his flies strung end-on-end could have served as a footbridge over the stream. There was enough flash on it to hail passing aircraft. Seriously? 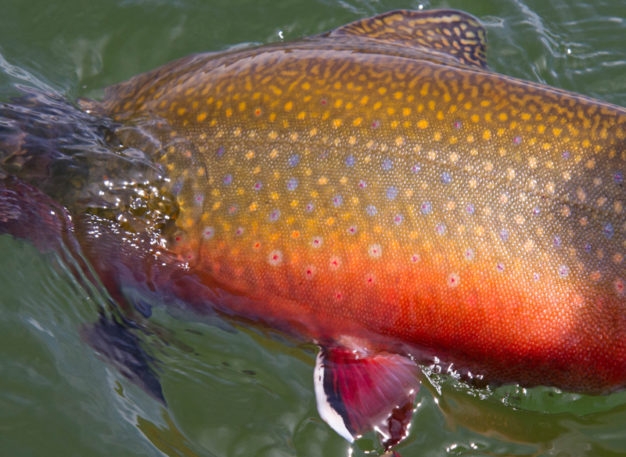 I flipped the fly into the pool I’d just covered tip to tail with the bugger. A four-pound brook trout, the most beautiful I’d ever seen, materialized from under the bank. Its ivory fins dripped wet paint. After that, we caught trout from three- to eight- pounds from nearly every pool in the river. We did the same the next day, and the next. 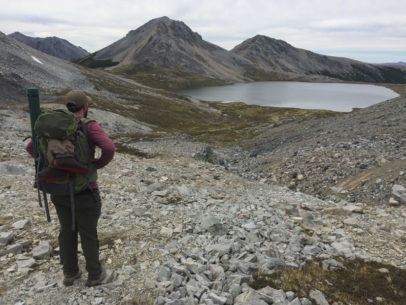 And then there was the all-day bushwhack over the spine of the Andes in a driving rain, across snowfields with tippy boulders and down the backside into a headwater lake that almost no one has ever fished before. If you want to know what happened up there you’ll have to try it for yourself.