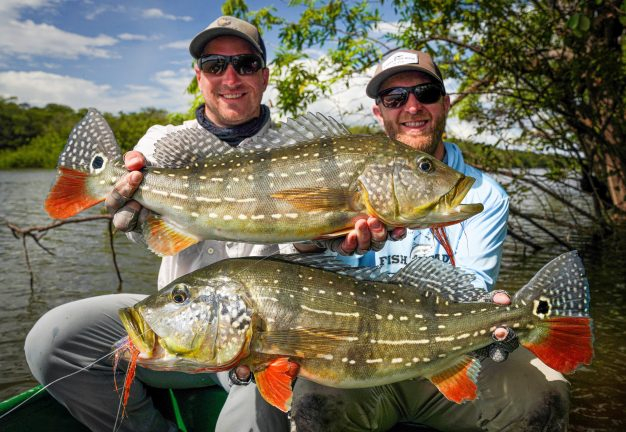 In January of 2021, my friend Brian and I set out on the adventure of a lifetime.  With our Trout Bum Rio Pico fishing plans dashed on account of the Covid-19 pandemic (we couldn’t get into Argentina), we quickly pivoted to a program in a country still allowing foreigners to enter.  Situated in the Orinoco Basin on the border of Colombia and Venezuela, The Jungle Bum program provides affordable and unmatched access to two of the most coveted tropical freshwater fish: payara and peacock bass. 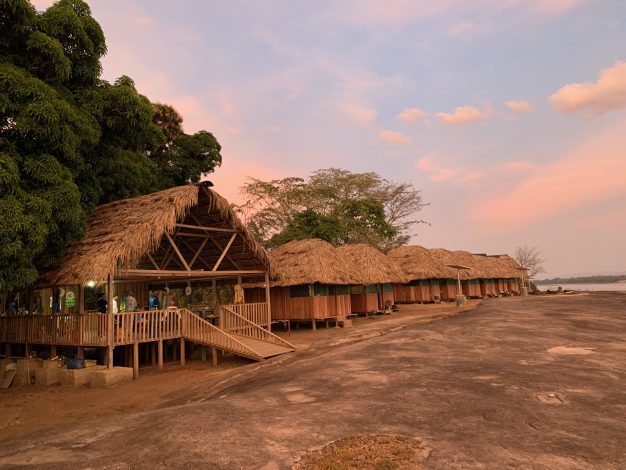 The primary camp for this one is situated on an island in the middle of the Orinoco River, and provides prime access to a world class payara fishing locale.  Anglers generally spend half of the trip at a second, mobile camp, on the Tomo River or Tuparro River.  These are tributaries of the mighty Orinoco.  This camp is located in whichever area is deemed to provide the best access to peacock bass fishing during a given time.  Located where the plains of eastern Colombia meet the dense jungle of the Amazon rainforest, the entire area is an ecological wonder.  This program is run by a dual American-Colombian citizen named Beto Mejia.  Beto spends the majority of the season fishing and guiding, and was a wonderful resource as we made plans to chase payara and peacock bass.  He has developed an incredible outfit in cooperation with numerous local indigenous residents who comprise the majority of the guide staff.

We spent our first day fishing a small river near the Orinoco Lodge.  This river is known for a beautiful peacock subspecies called the butterfly peacock, and we had the opportunity to catch several of these coveted fish.  Brian was also able to land a larger temensis peacock, but overall this was one of the slower days of our trip.  We enjoyed our first full day in the jungle and used frequent swims to help us adapt to the heat and humidity.  On the drive back to camp, we noticed an orange glow ahead of us on the savanna.  We subsequently drove through a grassfire, a common phenomenon during the dry season in this region of Colombia.  I admired the flames mere feet away from our truck, which complimented the pastel colors of the sunset off to our west.  This was only the first of many surreal experiences we would enjoy during the coming days.  During the next two days, we shifted our focus to the vampires of the jungle: payara. 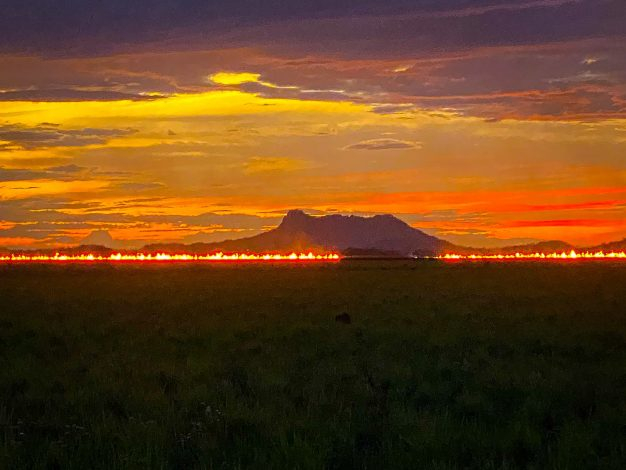 Payara congregate in the greatest numbers in the most turbulent stretches of a river.  This provides good oxygenation and a steady supply of stunned baitfish.  What better place to chase these fish than the biggest set of rapids on the fourth largest river in the world?  Only about a 40 minute boat ride upstream from the Orinoco Lodge, that is precisely where we headed to chase payara.  Seven kilometers of braided rapids provides more world-class payara water than I could properly explore in a year.  I will never forget the moment my guide dropped me off for the first time on a boulder amidst a Class IV rapid on the Orinoco.  He skillfully eased the boat up through the eddy formed by the boulder.  With the roar of the river making verbal communication impossible, he gesticulated toward me, urging me to jump off the boat and on to the boulder.  From there, I heaved my 10-inch long fly repeatedly In to the turbulent waters. 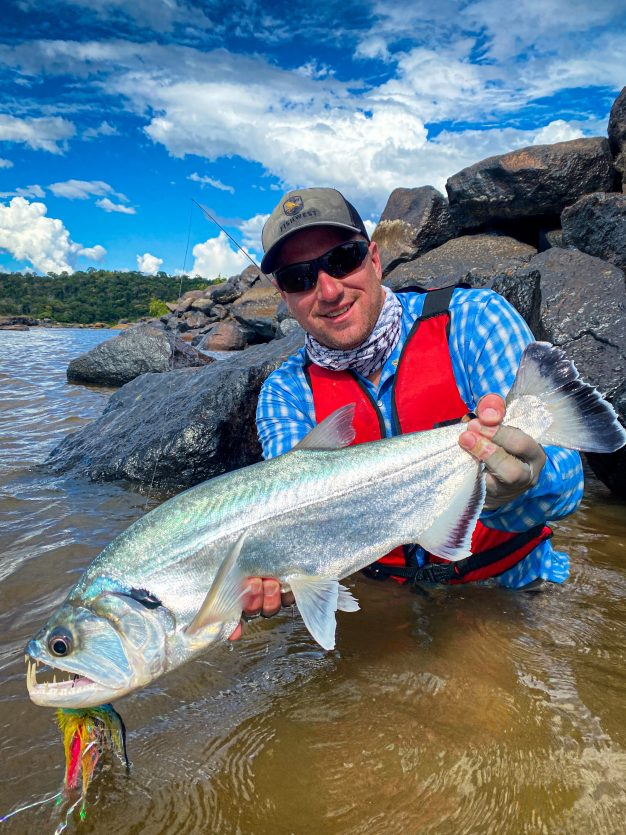 Several casts later, a vicious strike nearly yanked the rod from my hands.  With the surprising violence of the take, my strip set was non-existent, as I was too startled to effectively set the hook in to the rock hard mouth of the payara.  Thus, the experience was brief, but was only one of many chances we had over the next two days.  As we adjusted to the situation, we were able to land a number of really nice payara while fishing the rapids.

As the sun set on our second and final day of dedicated payara fishing, I had my most amazing moment of the trip, and perhaps the most cherished individual memory of my fly fishing career so far. We had walked about a mile up a side channel of the Orinoco, the payara were ON.  We worked hard to maximize our chances as the golden light of the fading day bathed the surrounding jungle in a serene pre-dusk glow.  We set up alongside a promising rapid, and I decided to swim out to a boulder in order to gain access to one of the best-looking seams.  On my third cast, there was an impressive disturbance in the water signaling the presence of a predator, but I felt nothing.  On the next cast, the payara left no doubt, and hammered my fly with aplomb.  Within seconds, it was stripping line off my 10 weight reel, and quickly took me downstream in to my backing. 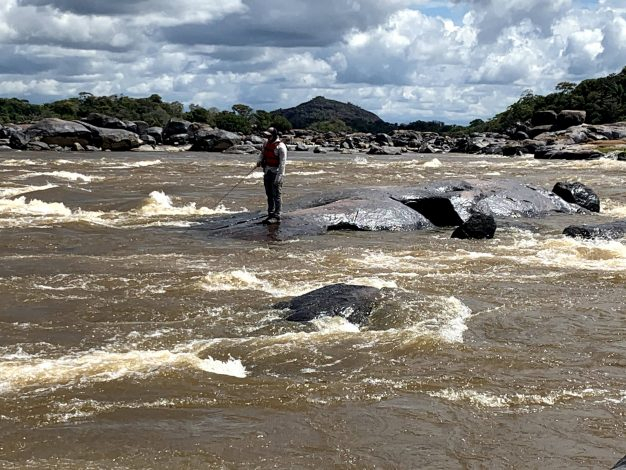 With the boulder-lined shore some 30 feet behind me after my swim, and no clear path through the rubble downstream anyway, my predicament was obvious.  I could point the rod at the fish and break it off, or I could jump in.  I hesitated briefly on the edge of the boulder as I watched the payara cartwheel through the rapids downstream in an athletic effort to shake my fly.  My choice was clear; I jumped in. 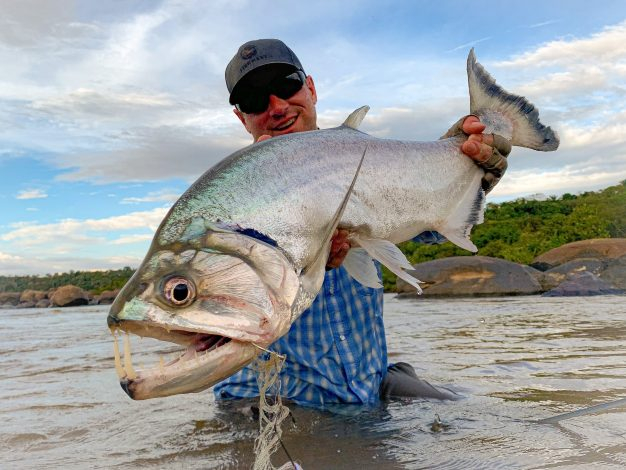 I swam about 100 yards downstream, much of the time just keeping my head above water and not really knowing if the payara was still hooked.  Eventually, I was able to swim to a small beach, where I stood up and felt the pull of the tiring fish.  Brian saw the commotion, and managed to hop through the boulders down to my position, where he helped me land one of the most remarkable fish I have ever seen.  It wasn’t the biggest payara of the trip, but it was simply a perfect fish.  For a few moments I admired its glistening silver flanks, its translucent pectoral fins, a powerful tail with spectacular black framing, and its trademark mouth full of razor sharp teeth.  I grasped its tail for an extra moment as it slid back in to the murky waters of the Orinoco.  Every landed payara seems to have a story like this attached to it, making them the most memorable species I have yet to chase with a fly. 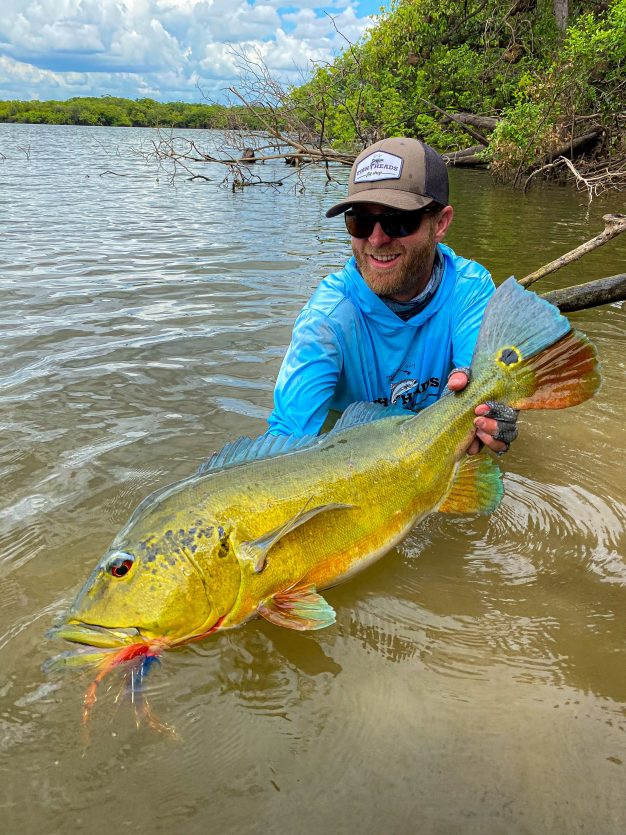 We spent the last three days of the trip targeting trophy peacock bass on the Tomo River.  As often happens during my adventures with Brian, I spent much of the first two days weeding out all the smaller fish so Brian could clean up with the “grandes.”  I connected with my first big peacock midway through the second day on the Tomo.  This resulted in an experience nearly as remarkable as the one provided by my last payara of the trip. 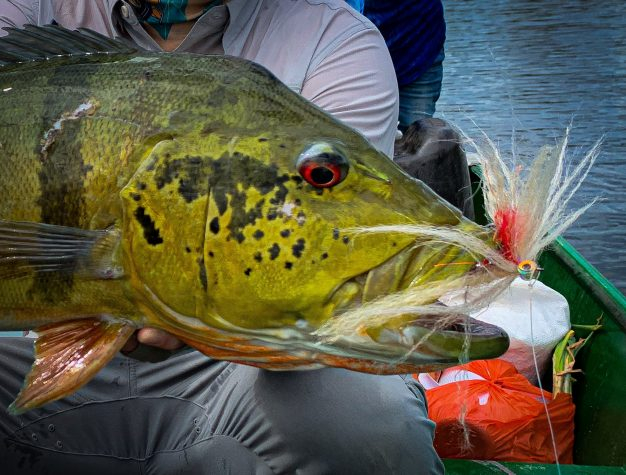 The impact of the take indicated that this fish was different than the 3-8 pound fish that I caught by the dozens during the previous day and a half.  Known in the region as “tucunarè,” meaning “friend of the tree,” this peacock lived up to its namesake and headed straight for the nearby flooded jungle.  My guide frantically rowed toward the middle of the lagoon, but I had another decision to make: put the breaks on the fish and risk breaking my rod or my 40 pound fluorocarbon tippet, or let the fish run in to the wood and try to untangle it later.  I slammed my palm down on to my large-arbor reel, and hung on for dear life.  I never quite figured out the best way to handle this situation, and I would end up breaking off several big peacocks during the trip.  But somehow, this one stayed on.  Peacock bass are the strongest freshwater fish I have encountered.  With several head-shaking jumps and screaming runs that left my fingers with burns, this fish tested the limits of my gear and skill.  These fish can only be appreciated fully when the angler gets a chance to hold one.  They are pure muscle, with iridescent tropical colors that seem to mimic the surrounding jungle.  The chance to hold a large peacock was a true privilege.  I had a moment to contemplate the absurdity of the situation as I resuscitated the big fish next to the boat.  Above us, a troop of howler monkeys swung through the canopy.  Simultaneously, an Amazonian river dolphin surfaced within 20 feet of the boat.  A caiman eyed us warily from the adjacent shoreline, and three red macaws flew overhead.  Fishing the lagoons of the Tomo River is an unmatched experience, even exclusive of the amazing fish that live there. 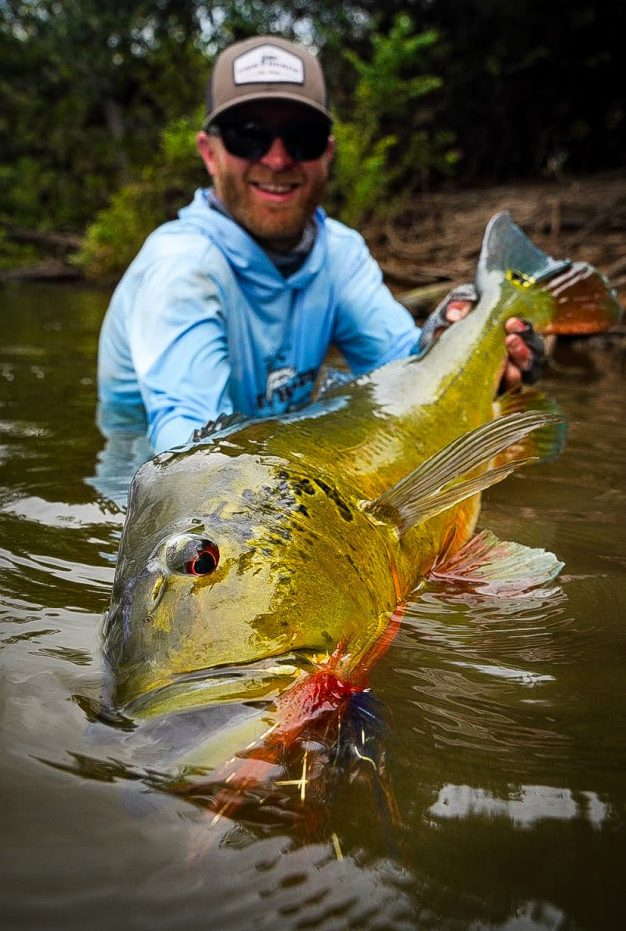 The last couple days of our trip yielded a number of additional outrageous experiences.  We had the opportunity to camp one night 40 miles upstream of the main camp on the Tomo.  Sleeping alone in the wilderness was a highlight of the trip for me.  Our guides set up shop on a pristine sandbar adjacent to one of the most productive lagoons.  We spent another couple days catching innumerable peacocks, including several more really nice fish in the 10-15 pound range.  During breaks in the action, we watched iguanas lounge in the adjacent trees of the jungle, while Orinoco Geese sauntered up the shoreline of the main river.  At night, we enjoyed a few beers by the fire, as we watched the shining beady eyes of a half dozen caiman patrolling the nearby lagoon.  I practiced my Spanish with our guides while Brian pulled strange nocturnal bottom-dwelling catfish from the depths. Our night and two days camping far from the main outpost on the Tomo will remain one of my favorite memories from the trip. 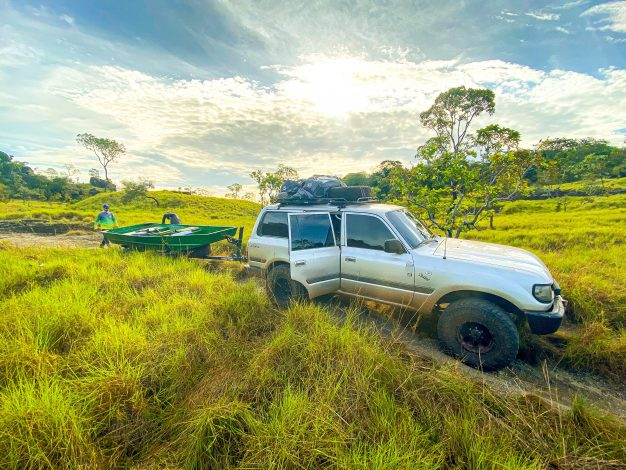 Our week in the Orinoco basin was an incredible adventure, but it presented a number of challenges that might not suit every angler.  It takes two full days of travel to reach the Orinoco from the United States, and that’s if everything goes well.  The jungle heat is oppressive, and it definitely took me several days to adjust after coming from the winter climate of North America.  While we hardly saw any mosquitos, the sandflies were voracious and we paid the price for leaving any skin exposed.  But the crew have made efforts to provide a surprising degree of comfort.  Both main camps had electricity and running water.  A generator powers fans in every room and tent, which helped us substantially when cooling off at night.  A professional chef from Medellín prepared all our excellent meals.  The Orinoco Lodge even had Wifi.  This is a perfect trip for anyone with even a single adventurous bone in their body.  I can hardly think of a better experience for an angler like myself who enjoys prospecting with a streamer.  I will definitely be back to the Colombian frontier to reacquaint myself with these incredible fish and the unique environment that houses them. 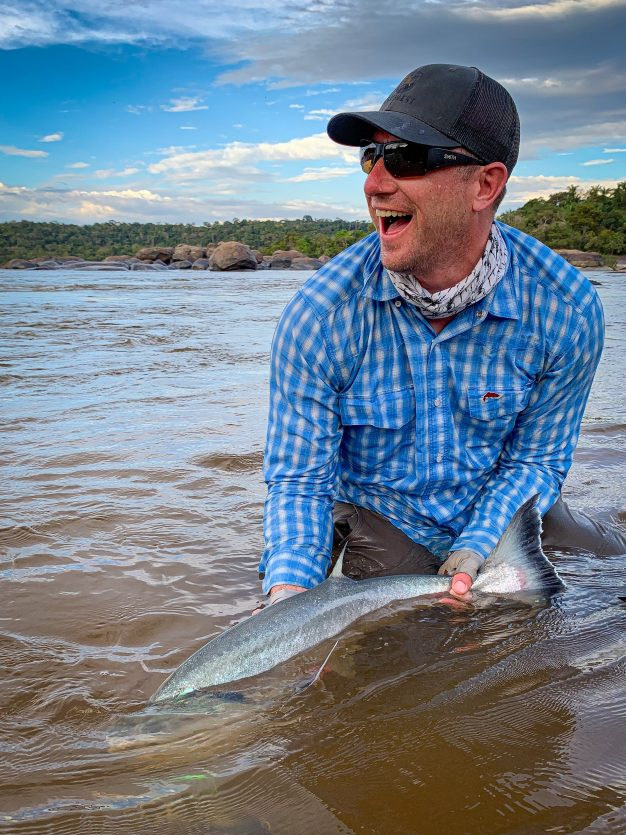