Finding Jeff Speigel's Cayo Frances Farm & Fly camp on Ambergris Caye in Belize was like looking for a golden needle in a haystack of fool's gold straws.  There just aren't very many places in this world that our Bum market can go to chase Bonefish, Tarpon, and Permit without having to be millionaires, trespassers, or both.  But while the front side of this island sports an airport with a cute community of golf cart paths winding through beachfront resorts and a myriad of busy tourist attractions, the backside is a whole other world.  Accessible only by boat and with almost no development, the leeward side of the island is pretty much mangroves, water, and well, fish.  Hence our interest in the back door.

Daily fishing options at Cayo Frances are pretty diverse.  We work with a number of guide services based in San Pedro who are more than willing to come around the island to the lodge for an extra $25 in fuel, and we are happy to set that up for whatever number 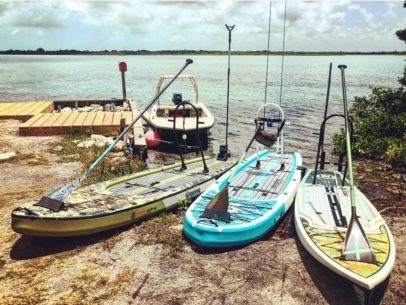 of days any guest likes.  But the beauty of this location and the way the program has been built is that this isn't in any way a requirement to access the fishing.  Right outside the door of the cabanas sits a dock surrounded by BOTE stand up paddle boards, fishing kayaks, and even East Cape Skanus all at the disposal of our guests, every day.  These watercraft not only allow you to fish your own hours your own way, but because of their  designs also allow you to access water that regular flats skiffs can't even get near. 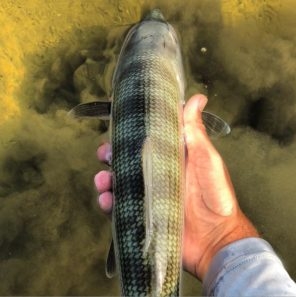 Bonefish are the most plentiful flats target in the area, and are often spotted cruising within sight of the dock as you load your boat for the day.  Once launched though you'll find them cruising the flats, lagoons, and mangrove edges pretty much anywhere you paddle.

Six to eight weight rods will do the trick for these guys, generally throwing weight forward floating lines and nine to twelve foot leaders with flourocarbon tippets in the ten or twelve pound range.

Crabs, shrimp, and other tasty little crustations are the name of the game in terms of fly patterns, and we'll have lots of specifics and suggestions for those as we help you plan your trip. 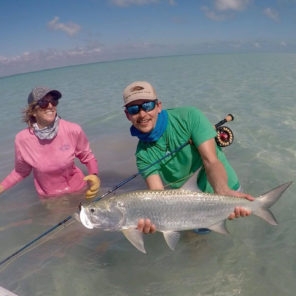 Tarpon around Ambergris Caye are primarily resident juveniles ranging from 20 to 70 pounds which are present all year, but fish over 100 pounds are common among the migratory schools that begin to arrive in late July, peak in August, and stay through sometime in September.

Nine or Ten weight rods with the standard shorter shock-tippet set up leaders are what is called for, and it's not a bad idea to bring a floater and a line with a short clear intermediate sinking head as well.

The standard bunny strips, tarpon toads, and weightless bait fish patterns all do the trick here when things go right, and we've of course got more specific suggestions in the pre-trip lit. 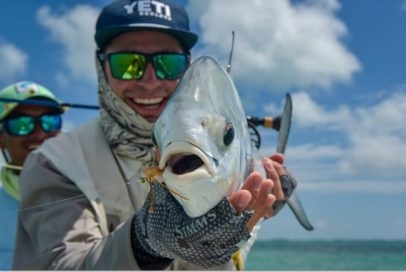 Permit.  We're tempted to simply leave it at just that one word, because in so many ways it says enough all on its own.  Once it's spoken though most folks want to hear more, so we'll go ahead and let you know that Ambergris is a world renowned destination specifically because of these fish.  And there are more of them on our side of the island than anywhere else around it.

Ten weights are the name of the game here.  The longer the leaders the better they work, with twelve feet being average and twenty pound flouro on the tips; in the end this comes down to being a function of what you can cast.  Permit are famously difficult for a reason, or rather, for a number of reasons.  They are spooky, picky, moody, and hyper-aware of their surroundings and our attempts to intrude upon those trying to trick them into eating a goofy looking little fake crab.  But that's why the things are so awesome!  Have at it. 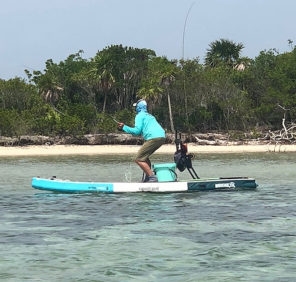 Gear required is pretty much the same as anywhere on the flats, and a comprehensive list of suggestions with respect to rods, reels, leaders, tippets, and flies will of course be provided before you make the trip.  You'll want to have a pair of flats boots or slippers for the wading, and of course the better the lenses on your polarized glasses the better you're going to be able to see the fish.  It's hot and humid and there are mosquitoes; dress accordingly.  The sun is the sun and it can hurt you so bring what you need to minimize that. On the off chance something were to happen that caused you to arrive empty handed though, we've got you covered and keep a stash of stuff here at the lodge for just that reason. 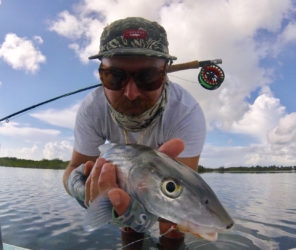 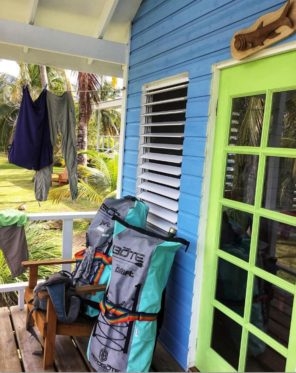 Lodging at Cayo Frances consists of two simple cabanas each with two beds, a dresser, a desk, and a small porch with a pair of Adirondack chairs, and full bathrooms with hot and cold water.

A second larger guest cabana, the BOTE House has two bedrooms with queen beds, a spacious living area with couches and a fly tying table, an en suite bath and large veranda. It’s the perfect setting for two anglers looking for a bit more space, two couples traveling together or to serve as the gathering point for groups/small hosted trips.

Common spaces include the main house with breakfast area, living space, and screened porch, as well as outside lounging areas and dining palapa, dock, and bonfire rally point for nightly libations.

Electricity is via solar panels with a diesel generator backup, and fresh water is made on site, so conservative use (especially in the showers) is greatly appreciated.  Wifi is also provided. 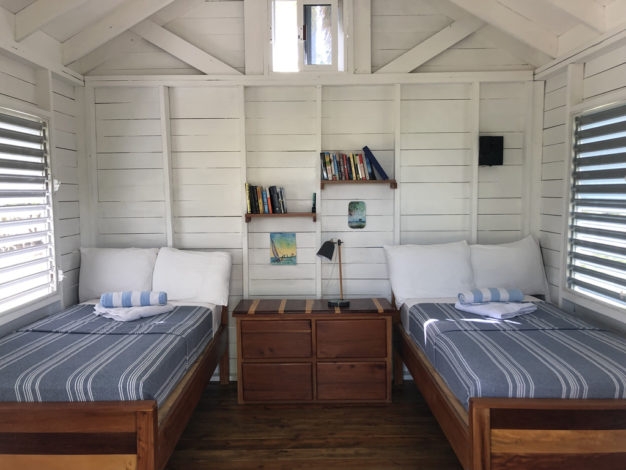 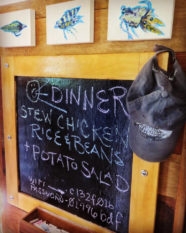 Jeff was a chef (stop rhyming and I mean it!) on the front side of the island before starting this new project on the back and amazingly enough still likes to make awesome food, even for other people.  Fresh stuff, and three meals a day all included in the standard rate.  Lunches and drinks can be packed up and sent out with the guests on their fishing days in the ol' industry standard YETI coolers.

For drinks there's a cooler of beer on the front porch and a simple bar set up inside, both on the honor system.  Guests simply help themselves and chip in accordingly before they leave so we can keep things stocked for our next guests.

(Anybody want a peanut?) 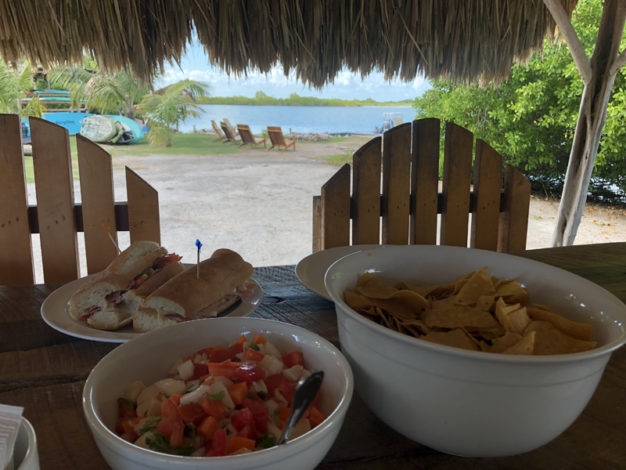 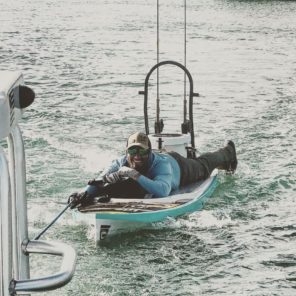 Getting to Cayo Frances is pretty easy (unless you're the guy in the photo on the right - we didn't like him). Guests first fly into Belize International Airport (BZE), then take a short (20 min) puddle jumper flight to Ambergris Caye/San Pedro.  The local airline most of our guests use is Tropic Air (www.tropicair.com).  If the lodge is your first or only destination then someone from the staff will meet you at the airport and run you over to the boat for what will then be a 35 minute ride to the camp.  Same deal on the way out, and if anyone has nights planned in San Pedro on either end of the trip drop offs and pick ups at the hotels as opposed to the airport can certainly be arranged. 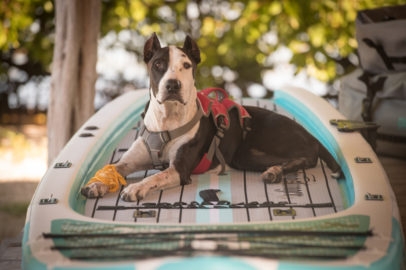 Rates are pretty simple:
$250/night per person in a standard cabana based on double occupancy
$275/night per person in the Bote House based on double occupancy
Contact us for group rates, full camp rentals and solo angler rates.
All rates include transfers to/from San Pedro airport and the camp, lodging, all meals and non-alcoholic beverages, use of watercraft and camp gear, and dog-petting rights (or rather, "privileges", depending on who the grantor is).
If you decided to do some guided days in a full-on skiff we'll be happy to put you in touch with the right folks and make sure it all gets arranged right but you'll handle the money part directly with them.
Cayo Frances is open 11 months a year, with October closed.  Get in touch and we'll look at some dates for your visit.  Our total capacity is only 6 guests at any given time, so try to book early - the calendar fills in pretty quick!
Tweet

Drop us a line and let's look at some dates if you're the right kind of rod holder for this spot.  The dogs are waiting.